Ten top rock bands are going to kick off Galtres Parklands Festival’s tenth birthday celebrations with a blast, thanks to a new collaboration between festival organisers and Soundsphere magazine. 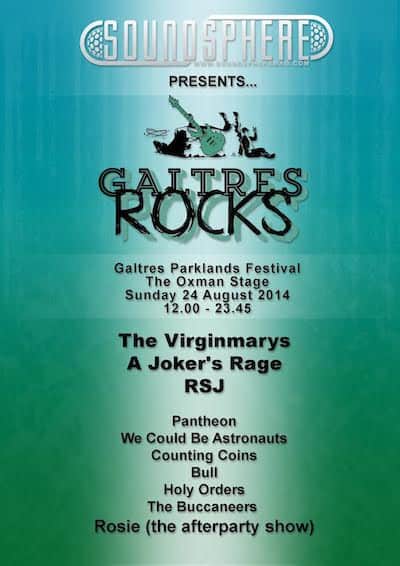 The Virginmarys – proud holders of a Classic Rock album of the year nomination for the band’s debut LP King of Conflict – return to Galtres as rock stage headliners after a storming 2012 performance, and will be joined by A Joker’s Rage, Counting Coins, Pantheon and an eclectic selection of the region’s best rock and alternative acts, chosen by Soundsphere magazine editor Dom Smith.

The ten rock bands will take over the festival’s Oxman stage on Sunday 24 August at Duncombe Park, Helmsley, presenting a high-octane alternative to festival acts such as The Human League, Levellers, Bellowhead, Public Service Broadcasting and Chris Helme.

Soundsphere magazine’s founder and editor Dom Smith said: “The opportunity to put on a rock and alternative stage at Galtres Festival is an amazing one, I’m really excited to be working with such a motivational team of people. Hopefully this will be the first of many years where we can showcase the best alternative talent from around the region. I’m really grateful to have the opportunity.”

A Galtres Parklands Festival’s Pete Wise said: “We’re truly delighted that Dom Smith and his colleagues at Soundsphere magazine have agreed to curate the Galtres Rocks takeover at this summer’s festival. We’re a proudly eclectic festival, and prouder still to give discerning listeners a chance to hear some of the best new music from the region and beyond. Soundsphere magazine have an outstanding ear for discovering the most exciting up-and-coming bands – we firmly believe our Galtres Rocks Sunday takeover on the Oxman Stage is in the safest hands in the business.”

Check out some of the bands below…