US-based artist Cynosure is turning to the internet to raise funds for his latest project; the construction and exhibition of his Punk Series of Electric Art Guitars. Using the medium of electric guitars. 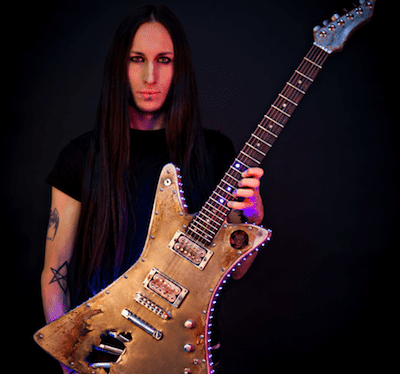 After developing the first guitar in his series (a Cyberpunk offering featuring LED fret lights and Skeletal Framing), Cynosure strives to initiate the full 8-Guitar exhibition. Cynosure states, “I am re-imagining the guitar entirely; not just as an instrument of functionality but as a working, playable art-piece.”

In-line with the Kickstarter guidelines, artists have a set number of days to raise all the funds or the project receives nothing. Cynosure will have just under a two month fundraising window from start to finish. If the project does not reach its goal before the end of December 2012, all pledges are cancelled and the construction will not be funded.

For now, Cynosure has set a somewhat attainable goal of $5,000 (US) for base production costs and materials, to create the remaining guitars. However, any money raised beyond that will be directly implemented into further promoting the project for gallery exhibition, space rental and guitar conventions. When asked about why Kickstarter was appealing, Cynosure notes, “Being independently funded will permit me to create, compose and establish the idiosyncrasies of each guitar without fear of restriction or constraint, as with large guitar corporations.”

The Cynosure Punk Guitar Series will constitute of eight guitars, each with its own unique ideals and ethos. Every art-piece will serve as the archetype for eight different eras of punk in which art galleries will showcase the guitars and link them to their own revolutionary periods.