Wrong Festival 2018 announces Future Of The Left, and more

Home » Wrong Festival 2018 announces Future Of The Left, and more

WRONG Festival are extremely pleased to announce their return to the Liverpool Docklands on the 28th of April 2018 for a second-year outing of vital oddball rock music from both the burgeoning local and UK-wide Freakscene.

£12 Super Early Bird tickets are now sold out, with the next allocation of £15 Early Bird on sale now via Skiddle, See Tickets and Dice FM from: https://wrongfestival.com/tickets

Following the success of last year’s debut event, which saw the likes of Bo Ningen, The Wytches, Part Chimp and Heck unleash their aural savagery on the assembled masses, the freaks are back to take over the sprawling DIY venues of the Liverpool Docklands area for another unforgettable day and night of the weird and wonderful.

Continuing to tie together an extremely talented – if sometimes overlooked – pool of visceral and exciting bands, as well as bringing in the high profile leaders and legends of the Freakscene, the festival organisers are very proud to announce that cult Cardiff rock band FUTURE OF THE LEFT (feat. members of Mclusky and Million Dead) will headline proceedings for the 2018 leg.

Festival organised Michael Edward commented on the news: “I think the success of last year can be summed up for me by a question that Dobbs from The Hyena Kill asked me just after their set: ‘Is this the best thing you’ve ever done?’ The answer was a resounding yes. It still feels crazy that it was such a success, and having seen weirder underground music start to get some more recognition in Liverpool has been a wonderful reward. This year we’re building on that foundation and bringing some real legends to Liverpool. I want this kind of music to become part of the city’s identity.”

Organised by Liverpool based record label Loner Noise, the event will take place once again across the venue trifecta of the Invisible Wind Factory, the North Shore Troubadour and DROP The Dumbulls Gallery, playing host to over 30 bands from the early afternoon to the small hours of the morning. 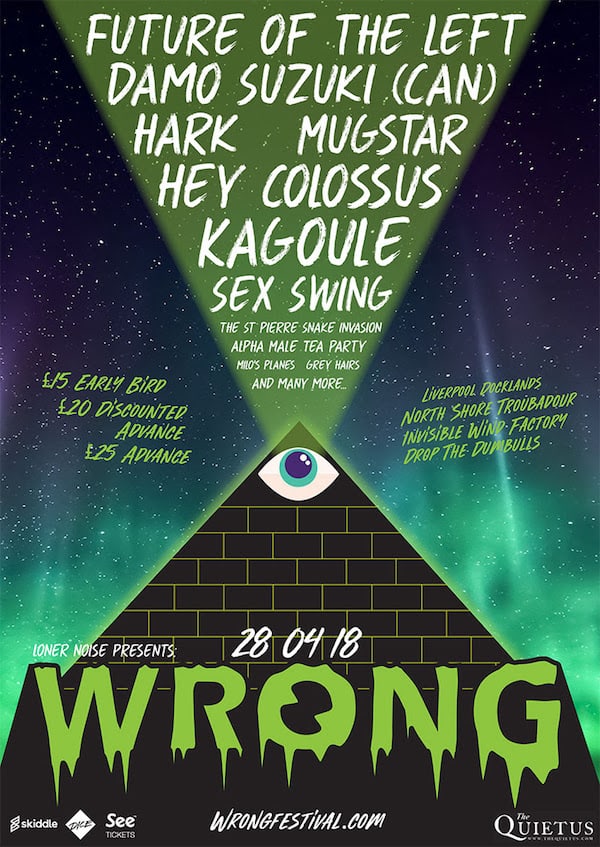