This week at Soundsphere HQ, Brett took on the interviewer’s chair and talked to Darius Keeler, multi-instrumentalist for the band Archive. They chatted about the new album, mental health in the time of Covid, success and much more! 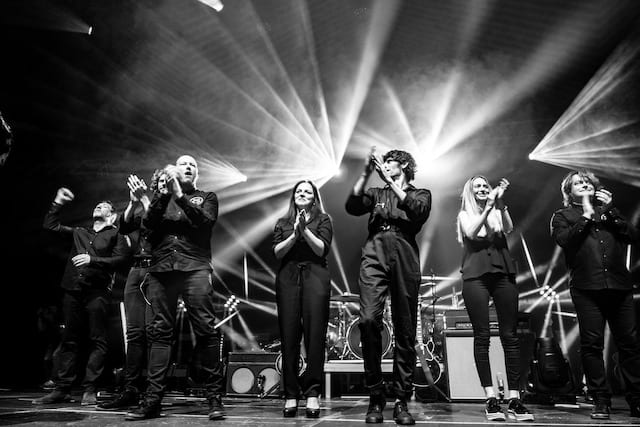 When we ask how he’s doing, he lets his anxieties be known: “Out of the frying pan, into the fire with the war,” referring to the current conflict in Ukraine. He talks about how playing shows in places like Paris have kept him sane. “We live in such volatile times, with Brexit and the pandemic. I think everyone’s a bit anxious, aren’t they?” Nevertheless, he remains excited about the new Archive album.

When raising the idea that music can be extremely cathartic during uncertain times, Darius gave this response. “It’s a very simple art form, you know? That’s what I love about music – it’s something everyone can experience – you don’t have to have any education or more profound understanding. He gushes about music being the most accessible art form and how everyone can relate to it, even on a basic level. No one needs that with music; with art and film, there are always barriers. But with music, it’s such a universally open art form.”

If you don’t know Archive, here is a little flavour of their history. Formed in 1994, the London band originated as a trip-hop band consisting of Darius, Danny Griffiths, and musician Roya Arab and rapper Rosko John. Over the next five years – the band had more breakups than you could count, and in the interim, added Suzanne Wooder in 1997. But over the years, the band has only grown stronger. Adding members left, right and centre, including Dave Pen and Polland Berrier to name but a few. In 2009, their single ‘Bullets’ made the charts in five different European countries, and of late, it has been featured in the trailer for Cyberpunk 2077. Now resembling a multifaceted group, akin to bands like Arcade Fire. With over 27 years of history behind them, they don’t seem like slowing down anytime soon.

‘Call To Arms & Angels’, is one of their best albums yet. With work originally starting pre-covid, the band reacted to the pandemic, and it radically altered how the album would eventually sound. “The fucking pandemic happened, and that kinda gave us a smack in the face,” says Darius. Carrying a sombre atmosphere, which reflects the last few years of how the band have felt. With topics like the pandemic taking centre stage. This album has helped them make sense of these dark times and delivered one of the most epic and sweeping albums Archive has ever produced.

With limited resources due to the pandemic, the band had to go DIY. Incredibly, they were able to pull this together and make it one of their best albums to boot. From the 35 songs originally recorded, 17 survived. When talking to Darius about the song ‘Daytime Coma,’ a song that starts with a dreamy quality and then morphs into something much more sinister – he unpacks why it feels the way it does. “It’s like a day in the life of the pandemic, where there’s so much in that song regarding the dreaminess of when the first lockdown happened.” He believes the song to be very impactful, and not only from his perspective. “The epicness of that album is that it’s a very real reflection of emotions from all the band members and their mental health during that time.”

The topic of mental health arises, and what Darius did during the time of the pandemic to help him get through it. The main thing that helped was his daughter. She was only two years old at the time, and being able to spend time with her made all the difference. He expressed the importance of nature during dark times – like during the Lockdown. “I’d started running a bit and just spending time in forests, walking around in deep nature.” It’s important to have different surroundings. otherwise, as Darius explains – depression can soon set in. “You’ve got to have contrast and different colours, and that kind of thing as a distraction from the horrors that were going on.”

A common question most bands get is how success has impacted them over their career. When this question is put this to Darius, he says he was never affected by the buzz of success when he was younger. He was always more focussed on the craft of creating music. But the band’s fragile relationship sometimes hindered things. “Every time we would have success, the band would break up, and then we’d freefall and then we’d get another deal.” This went on for a few years before stability was found. “It was only really by the third album, where we realised there was a fanbase growing and a real interest in Archive on the continent.” It wasn’t until his late 30s that Darius wanted a taste of famous life. Moving to Paris, he managed to achieve this. In terms of what success means to him now, it looks a great deal like it did when he first started. “We just want to be able to keep making music, man. We want to be able to keep going through all the problems with the world and stuff.”

With Call To Arms & Angels, Archive have proved they still haven’t run out of road creatively. With 27 years down, here’s hoping we have another 27 to go with the band.

The new album comes out 29th of April and their European tour kicks off this October in Belgium and concludes in London at Earth Hall on the 26th of November.