By Dom Smith May 7, 2022 Features, Interviews, News, Wrestling
No Comments

All Elite Wrestling and The House of Black’s Brody King has opened up about his diverse musical taste, and creative freedom in AEW, alongside Malakai Black and Buddy Matthews. 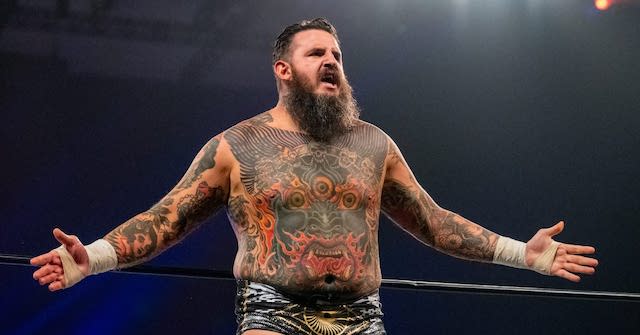 When discussing his success and getting to AEW, plus his journey through the likes of Major League Wrestling and Ring of Honor, Brody reflects positively: “I feel successful, especially in the short time that I have been wrestling, I feel like I have gained success quite quickly compared to some.”

Brody also looks at the similarities between wrestling and music: “Success musically for me is absolute creative freedom. Being able to go from concept to creation, and then having people respond positively to that. if you’re relating to a crowd what you felt inside, and they feel that as well, I don’t know what more you need.” Record sales and money aside, Brody says that someone relating to his music on a personal level means the world.

When it comes to wrestling, it’s well-documented that King has had a tough journey, originally working most hours of the week, and then wrestling indie shows on weekends to get to this point: “You just can’t give a fuck about what anybody else thinks. You have to do what you wanna do, and sometimes you sacrifice relationships, or money. When I was doing wrestling training, I was taking off work from a well-paying job, to go and do indie shows for no money in front of 20 people, and I was questioning if I’d done the right thing. Then 20 people turned into 200 people, and 200 into 20,000. I guess I was doing the right thing!! You gotta be true to yourself, and believe in yourself.”

In those moments where Brody felt like giving up, it was his support system that kept him going: “I have my wife who is incredibly supportive, and my parents are supportive. I had my core group of friends who were there for me. When Ring of Honor went under it was like, I had people around me telling me it was going to be fine. Just hearing those words of encouragement mean everything. You can tell yourself that, and it’s one thing, but if you have five people around you telling you, ‘you’re good’, it’s reaffirming, and it pushes you forward.”

In terms of what is pushing Brody right now in AEW, it’s the creative freedom that he is being afforded as part of the House of Black: “We are very fortunate right now in AEW that within reason Tony Khan is willing to let us have a concept and idea and run with it. If it doesn’t work, he’ll tell you, but if it does he’ll tell you!

“The House of Black was something that AEW didn’t have yet, there was The Dark Order that had darker nuances, but I think we are pushing the boundaries even further going in to religious cues, and elements from black and death metal, we’re working on a different platform. We are able to present a product that is completely unique to AEW. It was created and conceived within AEW. We’re getting a lot of momentum behind it.”

It turns out there are a number of similarities Brody finds in writing for his band, God’s Hate and working creatively with his fellow House of Black members, Buddy Matthews and Malakai Black: “God’s Hate for the most part, is me and Colin Young, we started the band together, and everything goes through us, and if we aren’t sure of something we’ll go to Justin who runs Closed Casket Activities. He’s kinda like our manager, and confidant, or we’ll go through Taylor Young [Twitching Tongues] who’s also in the band now, but before that he was one of my best friends. He’s the driving force and producer. If we’re butting heads, we’re able to talk to each other, and we always have the other to collaborate with.”

Brody continues on to discuss the parallels to being in the band, when working as the House of Black: “I don’t think there’s anything we’ve done that hasn’t been bounced off another member. Someone else’s creative influence can really start the flow. Someone else can make their art perfect themselves. I am not one of those people. I need influence and collaboration with others to put my best product out there – that goes for promos, and gimmick, even in the ring, it’s always going to be a collaborative effort.”

I ask Brody about his attitude to legacy now, reflecting on the memory of Pete Steele (Type O Negative), as he has a poster of that band on his wall, and he responds saying that is very important, it’s about creating a body of work that you would want to live forever: “In wrestling, I feel like you should always be trying to leave some mark on the business whether that’s you being a great performer, or wrestler or doing something that you want to do. Right now, there is nobody like The House of Black in wrestling. It’s different, it’s odd and scary. Some people don’t like it, well then, maybe it’s just not for them.”

Now, Brody will openly tell you (and its public knowledge) how much he loves Hatebreed, and how that sound directly inspires his own music in God’s Hate, but what people might not know is he’s actually a huge Disney fan: “I’m a pretty big music fan across the board,” he says. “I am a MASSIVE pop music fan. Lady Gaga is the “Queen of Pop” forever. I don’t care what anybody says, she owns it. People can say Madonna or whatever, they want but it’s Gaga and she’s proven it to this point!”

Brody also loves his share of Disney songs: “Especially Moana, Encanto and everything my kids are watching right now. They’re just so catchy. [The songs] are just pop songs, and if my kids and I can enjoy it, then they are doing a good job!”

You learn something new every day, huh?

Thanks to AEW, and to Brody for his time.

Watch and listen to the full chat below for more on God’s Hate and Brody’s other creative inspirations: