The Beatles brought us Apple, Led Zeppelin unleashed The Lemon Song and now Malcolm and Mikey Scott are about to launch a festival of fruit-related music. 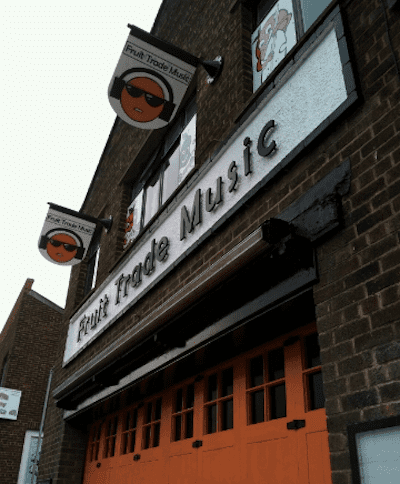 At the heart of the event will be Fruit Trade Music – www.fruittrademusic.com – a brand new recording studio housed in a former fruit market warehouse with the aim of nurturing musical talent from the Hull area and beyond.

The opening of the studio, on Saturday 16 February, will kick-start an all-day launch party which will also celebrate the release of ‘The Big Freeze’, the new CD by Mikey’s band, Eskimo Party.

The event is being organised with the support of neighbouring businesses including the Museum of Club Culture, which assisted Fruit Trade Music with its logo, the Yorkshire Brewing Company, which has created a Fruit Trade Music brew, and Fruit, the entertainment venue which will host live bands from 1pm until 10pm.

Sponsorship for the launch gig has been secured from MKM, City Electrical Factors and Arnold Laver. Mikey is the man behind the music. He plays guitar and drums and studied music at Wyke College before gaining an Honours Degree in Music Tech from Stafford University.

For five years he has been recording bands under the guise of Backyard Studio, in a converted garage at his home in Hull. Malcolm – Mikey’s dad – is a local entrepreneur with a strong background in commercial property. He spotted the chance to secure a lease on the former warehouse in Humber Street, and a three-month rebuilding programme followed.

The outcome is a first for the region – a recording studio where the viewing gallery is the street outside. The main doors fold back and visitors can watch what’s going on as Mikey operates the sound desk and the performers in the adjacent studio play their creations.

Also on the ground floor is a practice room, and upstairs are two tuition rooms and a relaxation area. The business model is flexible because that’s what most up and coming bands need – they can hire it by the hour if they want.

The atmosphere is family friendly – one of the viewing windows is the glass door from a washing machine and is positioned at child height, a few feet off the floor. Mikey says: “I’ve worked with local bands on a wide range of popular music recordings – rock, punk, indie, metal.

“But Fruit Trade Music means we can do more. We’ll have a record label to promote the bands who come here, we’ll organise live events to showcase local talent and we’ll also offer a band booking service to provide entertainment for parties, festivals, any events that need live music.”

Malcolm adds: “Based on watching Mikey and his pals over the years I think there is clear scope for the wider music industry to provide employment opportunities for young talent in sound and equipment engineering, event production, marketing, design, technical repair, retail and more – as well as performance.”