“Still in shape, my methods refined,” sings Paul Banks on ‘Toni’, the opening track from Interpol’s 7th LP The Other Side of Make-Believe, released July 15th on Matador. 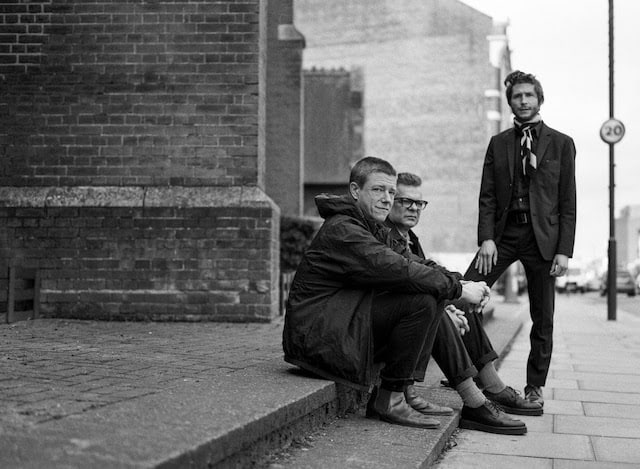 The album breaks fresh ground for the group: parallel to exploring the sinister undercurrents of contemporary life, Interpol’s new songs are imbued with pastoral longing and newfound grace. Daniel Kessler’s serpentine guitar arrangements crest skywards, Samuel Fogarino shatters his percussive precision into strange metres, while Paul Banks’ sonorous voice exudes a vulnerability that is likely to catch most long-term fans of the band off guard. After all, says Banks, “there’s always a seventh time for a first impression.”

A bolted-on future fan favourite, first single ‘Toni’ arrives today as the first instalment of a two-part dance film directed by Van Alpert (Post Malone, Machine Gun Kelly), with the second chapter to follow soon. Speaking on the collaboration, Banks notes, “It was a blast working with Van Alpert on the video for our song Toni. We bonded over shared film inspiration as well as a passion for classic music videos by the likes of Glazer, Cunningham and Jonze. Van, in my opinion, is in the club with these legends; and it’s exciting to watch him build his own enduring body of work.”

Interpol play the Roundhouse in London for two nights on June 14-15 and some of their biggest worldwide shows to date throughout the year, including the Rose Bowl Stadium in Los Angeles and City Palacio De Los Deportes arena in Mexico City.

The Other Side of Make-Believe began remotely across 2020. In early 2021, Interpol reconvened to flesh out new material at a rented home in the Catskills, before completing it later that year in North London, working for the first time with production veteran Flood (Mark Ellis), as well as teaming up again with former co-producer Alan Moulder.

Writing on their own in those geographically-dispersed early stages gave the members a way out of their respective heads: “We really extracted the honey out of this situation”, says Fogarino. Kessler echoes the sentiment: “Working alone was raw at first, but has opened up a vivid new chapter for us.” In the Interpol Venn Diagram, each member found a way of expanding their individual circle in perfect harmony.

Even with spare piano caressing the intro of ‘Something Changed’, open-hearted cyclical chord progressions on ‘Passenger’, or anthemic waves of Kessler’s cresting guitar on ‘Big Shot City’, it doesn’t mean Interpol are entirely stopping to smell the roses, though. The Other Side of Make-Believe’s title, cover and a frequent lyrical lean toward fables, smokescreens and the mutability of truth reflect Banks’ disgust with the curdling of the information age. “I feel like the slipperiness of reality, and being willing to get violent on the basis of a factual disagreement, has had a super strenuous effect on the psyche of everyone in the world. Although,” he laughs, “I was talking about it so often that it kind of spooked my bandmates, so I found a way to express my concerns more through the lens of human beings’ non-rational faculties, and less civilizational collapse.”

The Other Side of Make-Believe will soon feel as familiar in the public consciousness as it is to Paul Banks, Daniel Kessler and Sam Fogarino. Ever the paradox, the noirish trio have weathered nearly seven albums’ and several line-ups’ worth of rollercoasters far better than anyone might have predicted, never letting their sense of purpose escape. Over time, tags like ‘alternative’ and ‘indie’ have even faded from view. They are simply a rock group nowadays; one of the most distinctive, consequential and enduring rock groups of the 21st century so far. And a quarter-century into their lifespan, the band are all fired up again.

The Other Side Of Make-Believe Tracklisting

interpol new albuminterpol tonithe other side of make believethe roundhouse