Home » Joe Hendry comments on the significance of Bound For Glory, his inspirational character in IMPACT

Joe Hendry opens up to Dom Smith about his dream feuds in IMPACT wrestling, whether there is a darker edge to his new character, and whether he will be at BOUND FOR GLORY 2022… 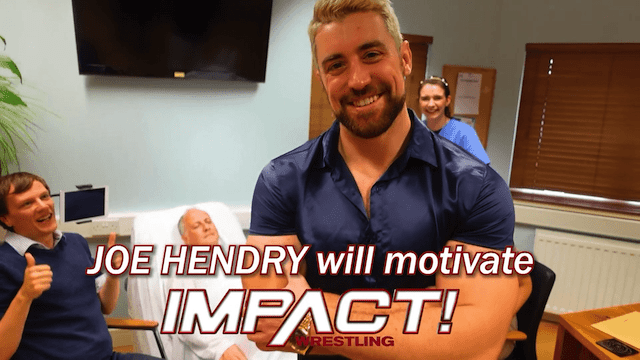 “It’s a dream job for me, and a dream situation. It is where I want to be,” says an enthusiastic Hendry on his signing to IMPACT. “The creative freedom has been great, they have just trusted me with the vignettes that I have been doing. It’s been awesome.”

The “inspirational” character we are now seeing on our screens is an amalgamation of The Local Hero, and The Answer personas that we have seen showcased the UK indies, and in Ring Of Honor before now. “Through COVID, I started looking at wrestling as a fan again. I always had fun videos, but it took me a long time to find my identity in the ring,” he says. “I had to build myself up from nothing again.”

Joe goes on to discuss the challenges he had in changing his image, and re-inventing himself to become something new: “I saw a bunch of wrestling action figures, and I remember thinking, ‘if I was an action figure, I’d be the most boring one’. Someone made me in Fire Pro Wrestling [the video game], and I was like, ‘yeah, that’s boring, I wouldn’t wanna play as myself.'”

Hendry started thinking about how he could change things up – he downloaded some wrestling games, and attempted to make himself into the type of wrestler that he (and others) would want to play as. “I dyed my hair blonde, I gave myself the best moves. I tried to look at it from a fan perspective.”

Joe goes on to talk about developing this “inspirational” character, and how he has stopped worrying about how it is perceived: “If you’ve got no haters, then you are a boring person. If you make something and get 100 percent positive feedback, that’s great, but I would rather be loved by a portion of the audience than just be ‘liked’ by all of them. The stuff I am making, I know is going to split opinions, I know the vignettes are going to be odd for some people. I think it’s funny if a guy who’s dead is clapping for me, and I think it’s funny if I enter a room to steal someone’s money. Thankfully the fans think it’s funny too!”

Is there a darker edge to the character though? Joe laughs: “How could it be dark if everyone is laughing?”

IMPACT Wrestling as a product

“I genuinely believe that IMPACT Wrestling has the best television wrestling product right now,” he says. “I love it. It’s a wrestling show. I love the production and presentation.”

In terms of “dream” feuds going forward, Joe looks forward to locking up with the likes of Eric Young, Brian Myers [for the Digital Media Championship], Eddie Edwards, and Moose among others: “I would love to have a go at the X Division, I think that would be a lot of fun!”

Joe also confirmed to us that he will be appearing in front of fans at Bound For Glory 2022, coming up in just a few days, at the time of writing: “I can’t tell you what I’ll be doing, but I will be there!”

The significance of Bound For Glory

Joe looks forward to making his presence felt in some form at this year’s Bound For Glory: “I remember watching IMPACT on my video iPod! The first match I put on there was Kurt Angle versus Samoa Joe – their confrontation, and their match from 2006! I had a moment where I realised that things have come full circle, and I am now doing what those guys are doing. It is awesome. I know that I have to give people a moment to remember at Bound For Glory.”

Listen to the full chat below, where Joe talks about his latest vignettes, advice for new wrestlers, and performers: