Kamille Brickhouse opens up to Dom Smith about the pressures of being NWA Women’s Champion, her bipolar disorder and some powerful tips for young people who are struggling for motivation. 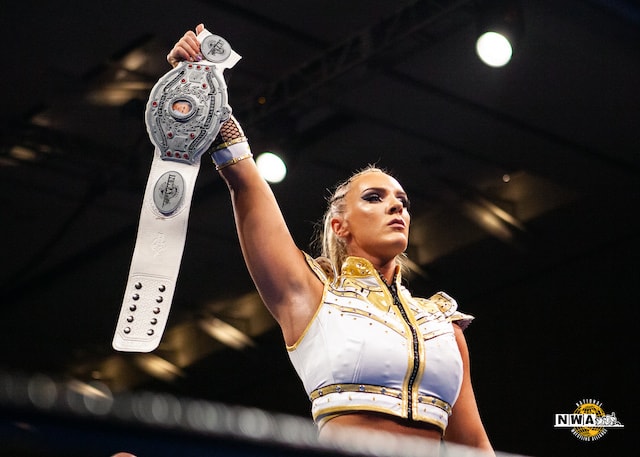 On success: “I think, for me success is just about being happy. I just want to feel happy living, and feel like I have a purpose. In wrestling, it’s important to be happy. It’s also about what you can do for the company that you are working for. Like, are you bringing people in to watch, so that people can discover other wrestlers they like, or the company as a whole. Someone might know who you are, but not the company as a whole. If my name can help the company, then that is a big success.”

Finding motivation on difficult days: “The days that you have that are really hard, or weeks, or months – it’s important to remember that there will be good times. Never move backwards, sometimes people say that it is important to always move forwards, but it is good sometimes, just to be still. Sometimes, you just need to be still. Try your hardest to think about things you are appreciative for. If I can do it, anybody can do it.”

“There are some days where I don’t get out of bed. Like I said, it is okay to be still. But, I also put a limit on it. I don’t want to stay in bed for like three days at a time. There’s a point where it’s like, ‘okay, I need to do this’ – even if that is just taking the dog for a walk. I have to take care of my dog, I have to make sure she eats!”

On gaining perspective when it comes to the wrestling industry: People are going to watch, and hopefully you can make them happy. Hopefully you can give them some sort of relief for the day, or some sort of entertainment.  You’re always going to be way harder on yourself than everybody else that’s watching. I have always been hard on myself, because I played sports growing up. So, if I watch a match afterwards, I’m always like, ‘oh, I didn’t like that’, but the fans don’t watch it like that. Sometimes when I get anxious, I will go back and watch old matches of mine, just to realise, ‘hey, you’re really good at this, and you know what you are doing’. It’s okay. When I hear the fans reactions, it gives me the comfort of knowing that I can do this. Lately, I’ve had a really hard relationship with the gym. I used to love going to the gym, but as part of my job [as a wrestler], I have to go. It’s like, at least I made it in there. At least I did something for the today. If you’re struggling you have to appreciate little victories. Even if that is just taking a shower, or getting dressed, because that is a big deal for me!”

Kamille reflects on her character development in NWA: “The no talking thing, that wasn’t planned. I was the bodyguard, and I wasn’t talking. Two years of not talking was hard, because I like to cut a promo. The funniest thing about it was that when I started talking, people were so disappointed that I was southern. They thought I was going to be English, or Russian! People were like ‘that doesn’t match how she looks!'”

On NWA’s legacy: “So many people have paved the way for us. With the history and the legacy of the NWA, you have to be really appreciative of that. We like to pay tribute to the past, but realise that we are doing our own thing. I do put pressure on myself as a champion, because I am the figurehead of the NWA, especially on the women’s side. It’s like, how I carry myself outside of wrestling, and inside the ring, I have to think about all of that. It’s not something I take lightly. I feel every bit of the pressure, and I do get scared sometimes, I do think that the pressure is good for me.”

Listen to the full chat below, where Kamille talks about her wrestling style, NWA 74, and more:

Card for each night. *Card subject to change.*

Matt Cardona vs his hand-picked challenger

Purchases for photos and autographs with Legends will be done in person at the Chase al la carte.