Slam Dunk are pleased to announce some very exciting additions to the Festival and as always there is something there for everyone! 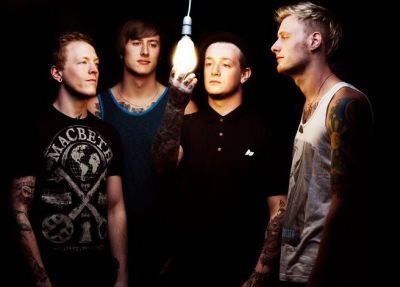 First up, there is the announcement of Deaf Havana (pictured). Slam Dunk Festival will see the first UK full live performance of the band in 2013 and will be one of only a handful of festival performances this summer.

“We are really excited to get back to Slam Dunk, we kind of made a promise to not do much whilst writing and recording our new album but we always have an amazing time at Slam Dunk, and with the added Wolves show we are cannot wait.  Plus – the after show, well…bit of fun isn’t it” says the band.

The band will use these shows to exclusively air new material from the album they are currently away recording.

King Prawn will be playing their first show in 10 years at Slam Dunk Festival 2013. The band have released the following statement: “We hope you’ll join us in sharing a leisurely stroll through some of our finest material both old and older in a set jam packed with firm favourites the whole family can enjoy.”

Chicago Drive Thru heroes Allister will not only be coming over to play the festival but for the 10th anniversary of its UK release they will be playing their seminal album ‘Last Stop Suburbia’ in full.

Slam Dunk is proud to see the return of US pop punk band Transit and UK act Me Vs Hero.

Scottish pop metallers Yashin who announced last week they would be playing the new Irish Slam Dunk last week, can now confirm they will be joining the bill for the main 3 festivals. The Word Alive will be tearing things up for the second year in a row but this time will be bringing Epitaph’s Our Last Night with them.

And finally after last playing Slam Dunk Festival with Dance Gavin Dance, Jonny Craig will no doubt bring an army of loyal fans to hear songs from his previous bands and new solo material.

Previously announced: All Time Low, Four Year Strong, Sleeping with Sirens, The Skints, Pierce the Veil, The Early November, We Are The Ocean, The Wonder Years, Memphis May Fire, Streetlight Manifesto, Andrew McMahon, Senses Fail, Woe Is Me, Polar Bear Club, Man Overboard, The Summer Set, Mallory Knox, MC Lars, Fireworks, The Story So Far, Handguns, Hands Like Houses plus many more to be announced across 7 stages.

Tickets for Slam Dunk Festival are £34 or £38 including the infamous aftershow party.

For details go to www.slamdunkmusic.com

All shows are 14+ and all aftershows 18+. All tickets onsale now!