Having just emerged from the studio after recording their debut album, and ahead of their dates supporting Against Me on their UK tour next month, Japanese Voyeurs have unleashed a free download of one of the new recordings, album track ‘Smother Me’. The track can be downloaded from their official MySpace. 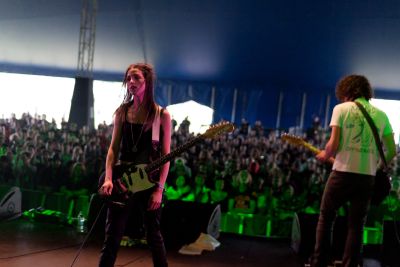 Singer Romily Alice explains “We wanted to give away ‘Smother Me‘ as an introduction to the record because it’s both brutally heavy yet very tender – it’s one of the slower tracks of the record influenced by some of the doom bands that we’re very into like Witchsorrow, The Melvins, Sloth and Earth.

“It feels good to finally let people hear something from the album. We had such an incredible time recording with GGGarth (The Melvins, RATM, The Jesus Lizard) in Canada and mixing with Alex Newport (ATD-I, Pissed Jeans, Male Bonding) in Brooklyn; just being able to work with such incredibly talented people was such a gift, so to have everything done and be able to start to let people hear it is a great feeling.”

Japanese Voyeurs will be playing the following shows on tour: