One of the most popular places to be at Reading & Leeds Festival is The Alternative Stage. The place to laugh, listen and let your hair down – this is the destination for the eclectic side of the festival. Now more names have been announced. There’s music from the hotly tipped Dry The River and Pete And The Pirates, spoken word fused with hip-hop from Dizraeli and film with Future Cinema in collaboration with Guillemots amongst many other names. 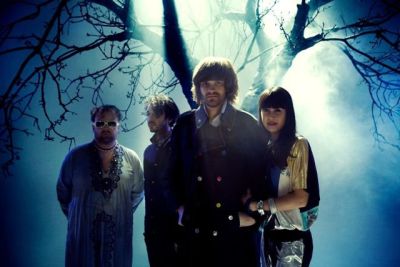 Transgressive presents its five year anniversary party at Leeds Festival with special guests Johnny Flynn who arrives with his band The Sussex Wit at this year’s Leeds Festival. With a CV that cites extra-curricular activities as an actor and poet, his musical prowess has picked up plaudits from both side of the Atlantic particularly after last year’s ‘Been Listening’ (his second) album which has seen him linked to the so called ‘Nu Folk’ scene spawned by the likes of Mumford And Sons and Laura Marling.

“Their rattly alt-folk is a rag-tag mixture of Americana, gospel and indie rock” hailed one critic last year on the newly arrived London quintet Dry The River. With an extensive live CV under their belt including some rapturously received shows at this year’s SxSW festival, the band released their first single ‘New Ceremony’ in March and are working on their debut album which should emerge later in 2011. Catch this beguiling and enthralling band.

Recently described somewhat lovingly as “something like a cross between the Kinks and Television Personalities” on the release of their second album ‘One Thousand Pictures’, Pete And The Pirates bring musical social commentaries and youthful exuberance to the Alternative Stage at Leeds this year. Since emerging from Reading back in 2007, the band have continued to build a reputation for their live shows which appears to show no signs of letting up.

Audiences can expect the best in film and music with a new collaboration from Future Cinema with Mercury and Brit Award Nominees Guillemots. Fresh from the release of their third  album ‘Walk The River’, the event promises an immersive fusion of cinema and sound as the band play live to very special secret film. Ahead of the feature presentation, sister-organisation Future Shorts present a series of specially selected shorts from across the Globe including surreal Animations ‘Bonefeather & Sam’s Hot Dogs’, music videos from REM & El Guincho, and much more.

Future Disco, the award-winning compilation series and worldwide party people, supply the very best in 21st Century Disco to close Friday night with an extra special bang. Future Disco bring their late night sleazy discotheque to ensure the party continues into the twilight hours. Under the shimmer of the mirror ball and with special guest DJs supplying the soundtrack, we welcome you to the Future Disco.

With a host of awards stretching back to his arrival in 2003 and including the coveted Chortle Best Show gong last year, Tom Wrigglesworth has established himself as one the most original and talented comedians on the UK and international circuit. 2010 saw a sold out UK tour, and his ‘Open Return Letter To Richard Branson’ commissioned as a series by Radio 4. An articulate and natural raconteur, Wrigglesworth appears at both sites this year, miss him at your peril.

From Camden, North London Roisin Conaty arrives at Leeds this year after winning the Best Newcomer Award at the Edinburgh Festival last summer. She appeared on Comic Relief earlier in 2011 with David Walliams and has recently returned from the Melbourne Comedy Festival. An exciting new talent so expect likeable self-flagellation and hilarious observations.

Rapper, writer, poet and singer, Dizraeli is a hip-hop tour de force. Taking on politics, love, rain, supermarkets and the nasty bits of Engurland with a sidelong smile and a twist of phrase, Diz is the BBC Radio 4 Poetry Slam winner, the 2006/7 Farrago UK champion, and (according to his website) a massive idiot at times.

You’ve seen him on a host of television programmes including ‘8 Out Of Ten Cats’, ‘Celebrity Juice’ and ‘The Friday Night Project’, now you can experience Rob Rouse first hand as he visits us at Reading & Leeds. Described by The Scotsman as “laugh out loud funny”, while the Edinburgh Evening News said “the tears of laughter came in floods”.

His October 2009 debut in London’s Soho Theatre made him the youngest stand-up ever to perform a solo season in the West End. As one of the fastest rising stars in comedy at the age of just 20, winner of 2011’s ‘Scottish Variety Award’ for best new comedian, Daniel Sloss is nothing short of hysterical. He’ll certainly be the name on everyone’s lips at this year’s festival.

Rob Broderick and James Hancox, take to the stage as Abandoman, claiming to be Ireland’s Number 7 hip-hop act. Yet give them a few minutes and some suggestions from the floor, and they’ll be improvising the kind of comedy platinum that has made them one of the stand-out new acts around. Improvised rap and comedy at its finest.

As a well-respected and highly regarded young stand-up comic, having performed on the UK comedy circuit to great acclaim Jimmy Mcghie heads to the Alternative Stage for another quality performance. He took his first solo show, ‘Jimmy McGhie’s Northern Meeting’, to the Edinburgh Festival in 2009 receiving rave reviews and returned in 2010 with a new self-titled solo show. Definitely one to watch.

Dead Cat Bounce are an international rock & roll comedy super group made up of Mick Cullinan, Demian Fox, Shane O’Brien and James Walmsley. Expect everything from hip-hop slow jams to 80’s stadium rock anthems, all performed in tight trousers with smoke machines and a lot of rock posturing!

With an amiable confident stage presence and a well written set Danny McCloughlin  delivers material with more than just an immediate pay-off line, preferring to take the joke one or two steps further. Confident enough to take a risk on stage he does so not to the detriment of the audience, keeping them laughing along or hanging on every word as a good MC should do.

Having showcased his talents on esteemed comedic TV vehicles such as Michael McIntyre’s Comedy Roadshow, not to mention being one of the lead writers on the hit BBC Three show ‘Russell Howard’s Good News’, Stephen Williams is one of the best stand-up performers around, so if you’re any sort of comedy fan…you really shouldn’t miss this.

Gar Murran won the Bulmers Comedy Competition in 2006, and as a result got picked to support ‘Puppetry Of The Penis’ for two nights at the Olympia Theatre in Dublin. He was in the final of ‘So You Think You’re Funny’ at The Edinburgh Festival the following year and now performs regularly at the Laughter Lounge, The International Bar and Comedy Cellar.

Ex. PE teacher, rugby player and Elvis impersonator Mike Bubbins took the plunge to be a comedian in 2008 and since then has written and performed his debut show at The Edinburgh Fringe Festival, been a regular guest comedian on BBC Radio Wales, and regularly performs, and headlines, at some of the best comedy clubs and theatres across the UK. Mike’s comedy style could maybe be described as mix of observation and exasperation. Although really funny would be more accurate. He MCs at Leeds this year.

Ranked no. 1 in Kerrang’s ‘100 Gigs That Shook The World’, and voted Nirvana’s Greatest Moment by fans in an NME poll, this legendary performance from Reading 92 is one of the defining festival moments in the world. This very special screening of ‘Nirvana ’92 Live At Reading’ runs through the whole set, including ‘Lithium’, ‘Smells Like Teen Spirit’ and ‘Breed’. (Leeds – Friday)

Earlier this year, The Beastie Boys released a surreal comedic short film entitled ‘Fight For Your Right Revisited’ to commemorate the 25th anniversary of their breakthrough hit ‘(You Gotta) Fight For Your Right (To Party)’ and the release of their new album ‘Hot Sauce Committee Part Two’. The film, which features cameos by an amazing number of famous actors, focuses on a conflict between the classic Beastie Boys (played by Seth Rogen, Danny McBride and Elijah Wood) and their time-travelling selves (played by Will Ferrell, Jack Black and John C. Reilly). Be sure to set aside half an hour of your time and check it out.

The award-winning photographer Seamus Murphy collaborated with PJ Harvey on her latest album ‘Let England Shake’ and directed a series of short films to accompany all 12 songs. They feature still and moving images from a 5,000 mile road-trip Murphy undertook around England. He has worked similarly with still photography on journeys through America and Russia and they make up a visual diary of Murphy’s journey, travelling light and alone, and his attempt to document England and the English. He has mixed his observations on England with images from his work in Afghanistan, Iraq and the Middle East – places Polly refers to in her depiction of England. The film soundtrack, the studio recording of the album ‘Let England Shake’, is mixed at times with footage and audio Murphy captured of Harvey in rehearsal and in performance. In addition some of the album lyrics were given a voice by people he encountered on his journey.

Tickets are strictly limited to a maximum of four per household for those booking by telephone or online and two per person for personal callers to walk in stores.

Reading tickets can be bought at face value, in person when paid for in cash at the Reading Arts & Venues Box Office, The Hexagon.

Leeds tickets can be bought at face value, in person when paid for in cash at Leeds Visitor Centre. Also in person from Crash Records and Jumbo Records subject to booking fees.

Please note that picture ID/proof of address will be required at the time of booking. Tickets are subject to availability. Limit of 2 per household/person for personal callers.

Children under 13 (12 and under) are admitted free but MUST be accompanied by a ticket holding adult. Please note there is no separate children’s area at this event.