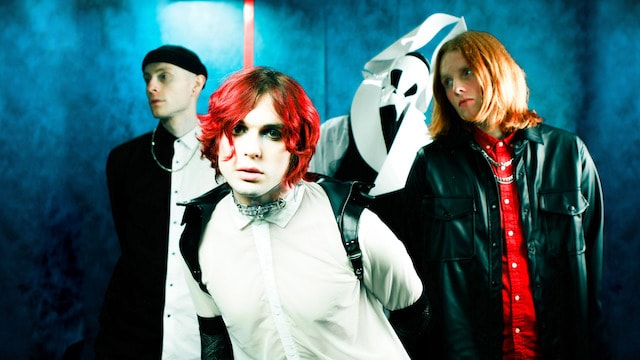 Few bands within the alternative scene had the devastating impact that Static Dress have in recent years. Voted by Kerrang! readers as the Best New Band Of The Year, their debut project Prologue… set the stage for what is one of UK’s music’s most exciting creative forces; a comic book and official soundtrack that built the foundations for the parallel universe they have teased with innovative puzzles and lore that has captivated fans. Since their inception, a wave of anticipation has surrounded the idea of a debut album; a chance for the band to set their own uniquely widescreen vision of the fullest of formats. Today, that vision is finally realised with the release of their highly anticipated first LP, Rouge Carpet Disaster.

Released independently and across 12 tracks, Rouge Carpet Disaster is the watershed moment that the new wave of contemporary rock music has been waiting for. Produced by Erik Bickerstaffe of Loathe and written by Static Dress, the album spotlights an imagination-capturing sound that transcends emo, screamo, metal, pop, electronic and so much more; making for one of the most ambitious statements made from within the rock format in decades. Featuring previous singles ‘sweet.’, ‘Di-sinTer’ ft. King Yosef, ‘such.a.shame’ and ‘fleahouse’, the album builds on these diverse mission statements – pushing the Static Dress sound to the extreme whether that’s the pummelling destruction of ‘Courtney, just relax’, or the haunting shoegaze melodicism of ‘Attempt 8’. Rouge Carpet Disaster is the sound of one of the world’s most captivating new bands, hitting their stride and challenging sonic binaries in the process.

With the release of Rouge Carpet Disaster, Static Dress have answered questions about whether they could maintain their consistency across a full length with the confidence of a group with nothing left to prove. With what feels due to be a defining album in alternative music this year, Static Dress harness the power of seminal works before them, while pushing the genres they fuse across their debut album into undefinable, progressive new territories.

To celebrate the release of Rouge Carpet Disaster, Static Dress will return to London for a one-off performance at Camden’s hallowed The Underworld venue on 30th August 2022. This performance will be their final headline show of the year and follows their sold-out UK headline tour in April. Tickets are on sale this Friday at 10am local time HERE.