Home » The Sister Column 4: The Architecture of Intimacy in Adrianne Lenker’s ‘songs’

Adrianne Lenker’s ‘songs’ is an earthy, stirring, and transportative album, brimming with compassion. This piece is a personal deep dive into how the production on ‘songs’ bridges the translation gap between live performance and recorded work. 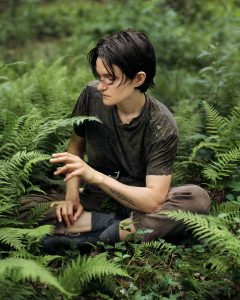 I am not a producer. Though I do have a great interest in production, and in my interest try to keep a keen ear for how songwriters choose to use production to help tell their songs’ stories. Until recently, the songs I have written had only existed as live performances. Documenting these in studio came with a somewhat obdurate question about the nature of recording songs written for live performance. For artists like myself, of the intimate folk fold, how can a record represent the live act truly and fully? Is it even possible? What is ‘lost in translation’ when you move from one medium to another? Is there a way to manufacture a sense of present-ness and intimacy if you feel the power in your songwriting is partly in its live performance? A rewarding artist to probe on this matter is inimitable sylvan songsmith Adrianne Lenker and her new record songs.

Adrianne tells her stories with striking candidness. The songwriting itself sees personal truths and archetypal ones spun deftly  into a mere couple of lines. This makes for some stand out moments in songs: “as the rock wears the weather, not a lot, just forever” on how feelings last and change us on not a lot, just forever, or “I don’t wanna be the owner of your fantasy, I just wanna be part of your family” laying bare the innocent, childlike need in us all to feel wanted and belonging in lead single anything. Live, her performance is spellbinding. Pin-drop silence, the hum of a room hanging off her every word. On tape, she somehow manages to retain this magic. In songs, this is down to a masterfully curated sense of place.

The production that cradles and frames these songs is, like abysskiss, very mindful of the space it was created in. During a Big Thief songwriting workshop held to raise money for Brooklyn Music Factory in New York during the summer, Lenker described her writing process as a kind of weaving of spaces for people to occupy. She describes adding “little specificities” – writing of “silver birches” instead of just “trees”, for example – as giving these spaces “corners and lines.” songs carries this ethos into the production of the tracks also. The roots of this can be seen in a couple of touchstone tracks from previous solo album abysskiss. In abysskiss, ‘from’ brings us into the hum of a kitchen; as the song unfolds a microwave dings and its plastic door slams, cutlery tinkles on plates, cupboard doors close and open. In songs, the space it was recorded in shapes the record entirely, from the writing through to the last details. Co-producer Weinrobe said to The New Yorker:

“The whole thing was structured around the space, which was very small, with exposed wooden beams. We could hear the bugs, we could hear the wind in the trees. The idea was to really lean super hard into that physical atmosphere, and to create a record that tried to mimic it.”

Nine of the pieces from the album were written in that space, and Weinrobe used a “binaural microphone to capture the sound of the cabin.” Birdsong, fingerboard creaks, microphone hiss, rain on the shutters; Adrianne starting forwards beckon rebound by turning a guitar pedal on and off, murmuring “that’s cool.” The sounds that aren’t direct results of the space sound like they could be. Gentle, brushed or shaken percussion accompanies many of the tracks, but it fits into the same world as a microphone catching a rustle outside the window, or the wind-like sound of clothed material rubbing near a mic. Inevitably, these songs sound as much a part of the space as the cabin itself, or the craggy woods that surround it.

The overall effect is a record that serves the senses all encompassingly. It is to the ears what filtered forest light is to the eyes; to the memory the heady aroma of dirt and pine after rainfall, the gentle hooks like the persistent soil under fingernails after digging for wild garlic. It does not evoke the same space as her live performance, but takes us somewhere that is intimate in a more personal sense, to our own individual understandings and recollections of forest and wild evoked in this strikingly honest approach to production. Records like this are teaching me that live spaces and the sonic space of recorded work are simply two mediums for storytelling that have different tools at their disposal. That may seem self-explanatory, but as a songwriter I had never looked at production as a tool for storytelling until I paid attention to records like this one. As we hibernate for what will inevitably be a long winter, songs serves a powerful escape, and we need the comfort of stories now more than ever.

Tune into Women I Trust with @elanorrosalind on Instagram Sundays at 7pm for conversations with women in the music industry.