Seminal Derry band The Undertones continue to celebrate their 35th Anniversary following the heavy demand for tickets for their April 2011 shows with more shows scheduled for December 2011. Like the April shows they will play their debut album, ‘The Undertones’, in its entirety and appeal for members of their original fan club to get in touch. 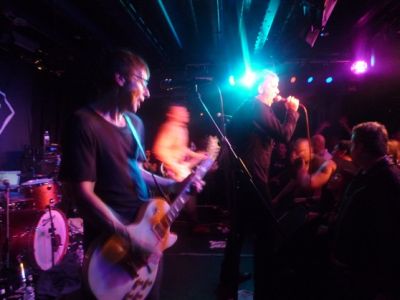 It’s been a long road from their first show in February 1976 at St Mary’s Scout Hall in Derry but 2011 has seen resurgence in interest in the band with shows in the UK, Europe and America.

As in April the band are keen to reacquaint themselves with members of their former fan club, the “Rocking Humdingers Club”, and have put out a Missing Persons Search. Mickey Bradley of the band said: ‘‘We recently came across the original membership book from 1982 containing the names of the Rocking Humdingers and thought it would be good to see them again. The response in April was great and as some members could not make the shows we hope they will be able to this time.” This offer is not open to those who did come in April.

The band hope to hear from these long-time fans and has promised the first 50 who get in touch free entry into a show of their choice, a copy of ‘The Very Best Of The Undertones’ and a tour t-shirt. They should contact the band via at: [email protected]

Additionally the band’s most recent two CD’s the 2003 “Get What You Need” and the 2007 “Dig Yourself Deep” will receive their digital release in December 2011.