This month we will be looking at a melody  with some arpeggios over a VI, V, I (B flat 7, A7, D minor) cadence in D minor. The first bar of this lick is all on the B string and uses doted notes so listen carefully to the phrasing. Starting at the F note at the sixth fret of we go down to the E at the fifth fret, then back to the F before sliding up to the G at the eighth fret and then back down to F and then E. The second bar starts with the same 2 F and E notes and then slides into the A at the 10th fret for the rest of the bar. You can also add some vibrato to this held note. 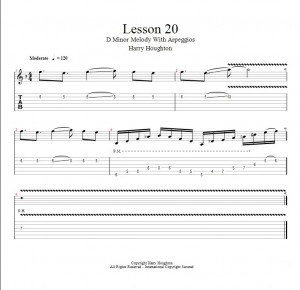 Bar 3 is the same as bar 1 and bar 4 features our B flat 7 and A 7 arpeggios which are all alternate picked sixteenth notes. We start with the B flat note at the sixth fret of the low E string and the pick the D and F notes at the fifth and eighth frets of the A string, then the A flat and B flat notes at the sixth and eighth frets of the D string. We then descend through the exact same notes but in reverse until we get to the D at the fifth fret of the A string.