The first video clip taken from the DVD of Nirvana’s concert filmed on Halloween in 1991 at Seattle’s Paramount Theatre has been released online this week. The footage has been transformed from 16mm film and multi-track audio and is one of 19 songs recorded at this show. These tracks will be available in the deluxe versions of the ‘Nevermind’ release in 1080p high-definition picture, uncompressed 5.1 surround sound and stereo on stand-alone Blu-ray, DVD and digital long form video formats. The track ‘Breed’, as captured on film at the aforementioned Seattle show, can be viewed below. 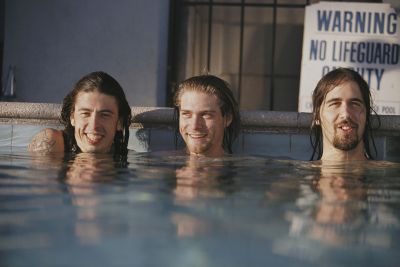 In related news 100 Nirvana fans have a chance to be involved in this week’s special playback event at the In Bloom Nirvana Nevermind Exhibition this Thursday, September 22. Kicking off the evening’s proceedings will be a panel discussion chaired by DJ, Classic Album Sundays founder and massive Nirvana fan, Colleen ‘Cosmo’ Murphy. Panellists confirmed thus far include Keith Cameron (Mojo, formerly XFM) and James ‘Jam’ McMahon (Kerrang! Magazine editor) with more to be announced over the next two days.

The evening will culminate with ‘Nevermind’ taking centre stage, as guests are invited to open their ears and take part in a truly unique listening experience. Played on vinyl from start to finish, through Linn’s finest system featuring the iconic Sondek LP12 turntable, expect to hear the album as never before. With only 100 tickets available, this event is set to sell out fast. Book your tickets online now for £15 at http://territorialmusings.eventbrite.com or, if you want to avoid the booking fee, tickets can also be purchased from reception within the exhibition at The Loading Bay Gallery, Brick Lane, London E1 6QL.

‘Nevermind’s release is embodied in a brand new website launched this week at www.nevermind20.com where Nirvana fans can share their thoughts on the album, post pictures and artwork. A number of musician fans of the band and album including Alex Turner, Chris Cornell of Soundgarden, Corin Tucker of Sleater-Kinney, Flea of Red Hot Chili Peppers and Eddie Vedder of Pearl Jam have left their own messages on the website. The site also features a timeline that tells the story behind ‘Nevermind’, complete with photos and videos.

Former Nirvana member Dave Grohl writes: ”All of that success happened so quickly. The funny thing is that Nirvana were still playing places that held 700 to 800 people by the time we had a gold record. We were still touring in a van when we had a Platinum record. I was still living in my friend’s back room by the time we’d sold ten million records.”

The multi-format reissues of Nirvana’s ‘Nevermind’ are scheduled for release on Monday, September 26 via Universal Music Enterprises featuring dozens of rare and previously unreleased performances.