Maryland rockers Clutch have announced ‘Earth Rocker’ as the title of their new studio album. 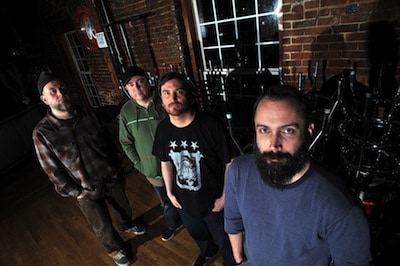 Earth Rocker is scheduled for a worldwide release in March 2013 on Clutch’s own label Weathermaker Music.

In conjunction with the album release, Clutch will embark on the ‘Earth Rocker’ world tour, and there will be a special date on January 22 in London. Tickets are available here: http://www.livenation.co.uk/artist/clutch-tickets.

The band has completed tracking ‘Earth Rocker’ with Machine handling all production duties.  Machine is currently in the mixing process of the album.Fans can keep up on the progress of Earth Rocker by visiting the new website: www.earthrocker.com.

Frontman Neil Fallon commented on the the recording process for ‘Earth Rocker’ and how it relates to other Clutch albums: “Last minute overdubs are fun.  Harmonicas, tambourines, claps, the odd backing vocal. Recording can be monotonous, so those unintended moments can be a lot of fun. It’s kind of like kindergarten music class, but with beer. And sometimes the spontaneity of a last ditch idea breathes a lot of life back into a song that we’ve been beating up for weeks on end. A looming deadline can be a great muse!”

He continues, “It has a lot in common with ‘Blast Tyrant’ in that Machine’s production techniques are really unique. It differs from ‘Blast Tyrant’ and a lot of other Clutch records in that, overall, the songs are faster and concise.”