The line-up for the second holding of a Nottingham music festival next spring has been disclosed. 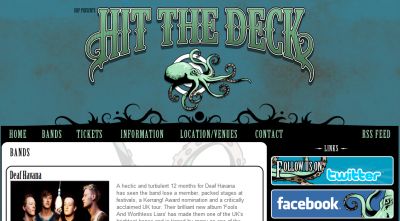 Hit The Deck Festival, which takes place on April 22 at multiple venues across the city, includes sets confirmed so far by Kids In Glass Houses, Deaf Havana, The Wonder Years, Of Mice And Men, We Are The In Crowd, The Swellers, Every Avenue, Shadows Chasing Ghosts, Wolves Like Us, Yashin Silent Screams, Imperial Leisure, Blackstorm and Juinius.  Other acts are promised to be added to the bill.

Event promoter Amy Biggin says: “We’re really excited to be announcing the first wave of bands for Hit The Deck 2012. As well as the bands we’re also really excited about bringing on board a new venue, so we now have six stages across four venues.”

Meanwhile, the frontman of one of the scheduled bands, Kids In Glass Houses’ Aled Phillips, adds, “We’re stoked to be headlining Hit The Deck, it will probably be our first festival of 2012 so we’ll be ready to smash it. We heard great things about this years festival and know next year will top it!”

Tickets for the festival are now on sale via the following link; while the Hit The Deck festival website can be found here.