Leading musicians and comedians perform at a pre-Christmas gig to commemorate a landmark anniversary for a charity for homeless people. 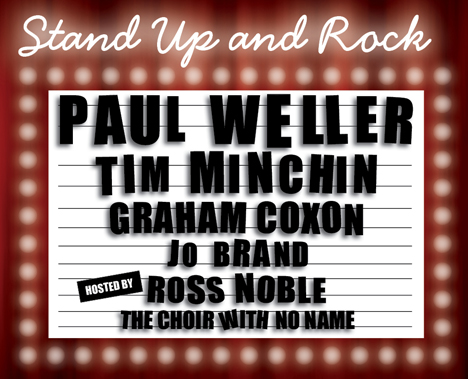 The ‘Stand Up And Rock’ event, in aid of the Crisis at Christmas campaign, features live sets by Paul Weller, Graham Coxon and The Choir With No Name.  Stand-up routines are provided by Tim Minchin and Jo Brand, while Ross Noble plays the role of Master Of Ceremonies.

This Christmas sees the 40th year of the charity’s campaign. Crisis’s Chief Executive, Leslie Morphy, says: “We’re really excited to have such an incredible array of stars signed up for Stand Up and Rock for our 40th anniversary. Whilst we should celebrate the lives helped and changed, it is a scandal that homelessness still exists and that we are still needed at all.”

Weller adds, “It’ll be good to get on stage for Crisis again. In hard times like these, more and more people need their help, so I’m happy to support Stand Up and Rock as Crisis at Christmas turns 40.”  Noble, meanwhile, fondly anticipates his presenting role on the night; “I’m a massive fan of all the acts and it’s an important cause, particularly at the moment. It promises to be a special night of, well, stand up and rock really.”

The evening also sees Crisis seek signatures for a petition to endorse a lobbying campaign, ‘No One Turned Away’, for more stringent and more accessible needs and rights for people who are homeless or whose domestic situation is vulnerable, including written advice and emergency accommodation.

‘Stand Up And Rock’ takes place at the Hammersmith Apollo in London on December 20. Tickets are now on sale, and you can find out more information on obtaining them, as well as more on the Crisis At Christmas campaign, on its website.