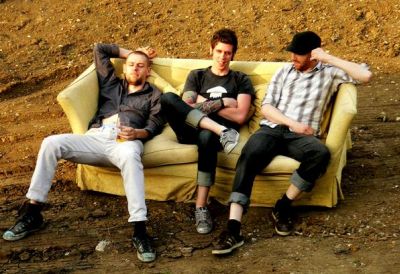 Their first album, ‘Chauffeurs’ (Function Records, 2009), was well-received by those of a more adventurous journalistic persuasion, and enabled them to play and tour with a wide variety of established groups such as Dysrhythmia, Oxes, Pneu, Shield Your Eyes, Nope, KONG, Trio VD, Bastions and Bilge Pump.

‘Chauffeurs’ served as an initial statement of the rhythmically-twisted, emotionally-oppressive aesthetic which has been developed and refined on their latest record, ‘Stay In The Home You Love’ out on November 14 via Function Records.

Possibly on account of its complexity and percussive density, Nitkowski’s work engenders some comparisons to math-rock luminaries such as Don Caballero and The Edmund Fitzgerald, but the band themselves are not particularly enamoured of the genre, preferring to cite the ominous, caustic and frequently cyclical post-punk of This Heat as a primary motivation.

Taking inspiration also from the aggressive, disjointed style of Botch and the interlocking or cyclical rhythms of Indonesian and West African music, Nitkowski have moulded a sound which does not sit easily within the confines of any pre-existing scene. Although their music is frequently described as technical, this element is always at the behest of emotional content, with overarching lyrical themes of loss of “self” and dignity providing a tragedy-tinged counterpoint to the dissonant, frequently melancholy guitar tones, disorientatingly-skewed drum figures and auspiciously-timed bass “drops”.

A conscious decision was made to bring a cleaner, more precise sonic quality to ‘Stay In The Home You Love’ by avoiding heavy use of distortion or compression, and generally keeping processing to a minimum. The result is a more lucid document of the music’s structural complexity and an honest depiction of the dynamic range employed by the band during a live performance. Nine of the tracks were laid down simultaneously in the same room to ensure interaction between the players. The exception is the claustrophobic ‘Pall Flag For The Bunting Tosser’, which features muted techno-inspired bass figures and eerie electronic soundscapes.

For more information on Nitkowsky as well as tour dates, visit the official website.