“There will be blood” at Halloween Crossfire ball

A stellar line-up is promised by the organisers of this year’s Crossfire Halloween Massacre, marking its 10th anniversary this year. 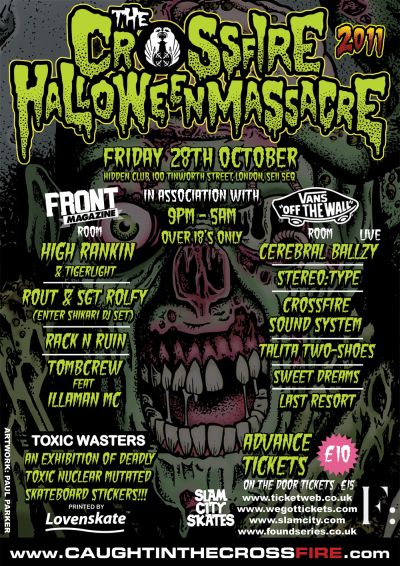 The event, which takes place on October 28 at London’s Hidden club, features two rooms dedicated to dubstep and rock sounds, on stage and on record, as well as an exhibition of skateboard art by twelve leading illustrators.

The headline act confirmed to appear at the Crossfire night is Cerebral Ballzy, and the Brooklyn quintet promise “there will be blood”.  DJ sets come from Talita Twoshoes, Rack N Ruin, STEREO:TYPE and Rout and Sgt Rolfy of Enter Shikari.

Advance tickets for what the organisers describe as a ‘night of carnage’ are now sold out; the admission on the door is £10.  Full event information is available on the event website.