The Londoners who seek to “put the ‘punk’ into steampunk” release their second collection of songs in the coming months. 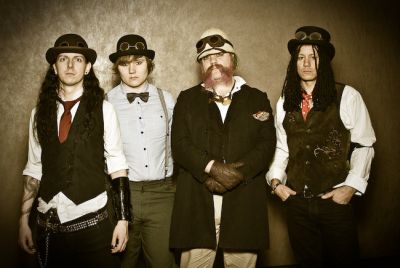 The quartet describe the follow-up to what is now titled ‘The Steampunk Album That Cannot Be Named For Legal Reasons’ as “Dr Jekyll, Dr Watson, doctored history and Doctor Who”; appropriately, The Seventh Doctor himself – Sylvester McCoy – lends his voice to the band’s sophomore LP.

The Men That Will Be Not Blamed For Nothing perform two shows in the capital this February, and they mark the launch of “This May Be The Reason…” at Club AntiChrist on March 9.  More details on these shows and the gentlemen themselves, are on their Facebook band page.