Fresh from the release of their latest album ‘Oceania’, The Smashing Pumpkins are back in the UK this summer and will be playing three dates this July culminating with a huge show at London’s Wembley Arena. 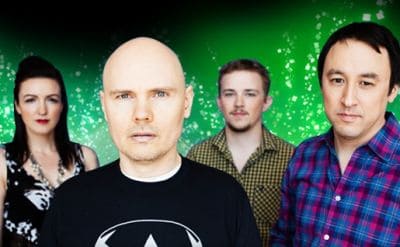 Their latest album ‘Oceania’ marked their first full album since 2007’s ‘Zeitgeist’ and was recorded at singer and guitarist Billy Corgan’s private studio in Chicago with his bandmates: guitarist Jeff Schroeder, drummer Mike Byrne and bassist and vocalist Nicole Fiorentino.

The album was produced by Corgan and Bjorn Thorsrud and mixed by David Bottrill. Marking The Smashing Pumpkins’ seventh studio record, it is “an album within an album,” part of their 44-song work-in-progress, ‘Teargarden By Kaleidyscope’. ‘Oceania’ was created by the band as a true album experience for listeners.

Last year, The Pumpkins performed ‘Oceania’ in full at their solo shows worldwide, backed by visuals prepared by Sean Evans, whose most recent work was assisting Roger Waters on the newest staging of ‘The Wall’. For their 2013 dates The Pumpkins will be using new technology in video mapping to create something new and previously unseen. For the second half of the show, The Pumpkins will perform classics from their body of work.

The Smashing Pumpkins will be coming to the following venues this summer: