‘Scenes From The Suburbs’, a short film by Spike Jonze, is set for a DVD release on June 27, 2011 via Sonovox, and will include two previously unreleased exclusive tracks recorded during ‘The Suburbs’ album session. 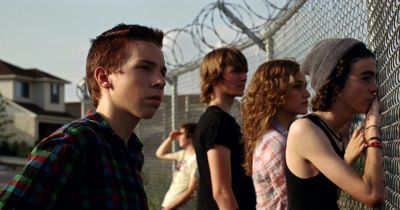 The 30 minute film, inspired by Arcade Fire’s recent Grammy and Brit award winning album ‘The Suburbs’, is directed by Spike Jonze and co-written by Spike Jonze, Will Butler and Win Butler.

The Scenes from the Suburbs DVD package will include:

DVD: ‘Scenes From The Suburbs’ (30 mins, colour) plus ‘Behind The Scenes’ documentary;  CD: ‘The Suburbs’ album to include a new extended version of ‘Wasted Hours’ plus bonus tracks ‘Speaking In Tongues’ and ‘Culture War’, with a 76 page booklet.

Arcade Fire will return to the UK this Summer for a massive show at London’s Hyde Park before heading north for dates in Manchester and Edinburgh.