Robert Maltby has launched an exhibition is Manchester in order to raise money for The Sophie Lancaster Foundation. 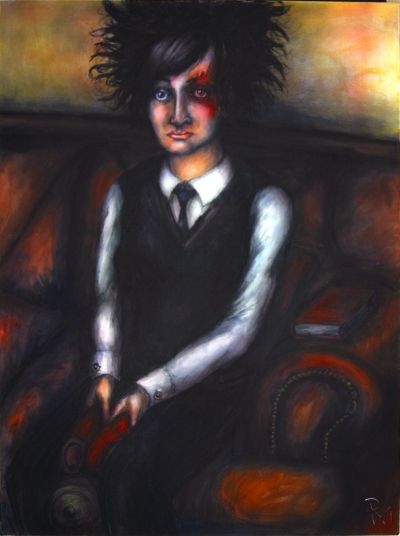 Nearly three-years-ago, Sophie Lancaster, and her boyfriend, Robert, were beaten to death  by a gang of youths, simply because they chose to dress “differently”. Sophie died from her injuries. Following Sophie’s death, her mother, friends and family set up the Sophie Lancaster Foundation, with an aim to change attitudes in society, promoting tolerance, understanding and respect for all subcultures.

In 2010, Robert has created his first collection of paintings, in his own unique style, to celebrate Sophie and all that she believed in and raise crucial awareness and funds for the foundation.

The collection of 15 canvases, named ‘Crimson Iris: The Art Of Sophie‘, created with a combination of acrylic and inks are named this because, even though traditionally the iris is a symbol of faith, hope and wisdom, the unnatural colour symbolic of violence, anger and danger essentially taints the meaning of the flower, creating a contradiction that inspires Rob’s paintings.

The collection, sponsored by metal guitar brand, Jackson, will be exhibited at Manchester’s Afflecks from June 7 until the end of the month, and all paintings are on sale for between £350 and £1,000.

Helen Varley, Marketing Manager, Fender Musical Instruments GBI says:  “Saturday August 11, 2007 is a date I remember, sadly due to the vicious assault on two young adults, Robert Maltby and Sophie Lancaster, not because of what they said or did, but simply because of the way they looked. This tragic story shocks me now as much as it did back in 2007, and by supporting Robert’s art exhibition, Fender, through our Jackson brand, strives to help to change peoples attitudes towards subcultures and raise awareness of the Sophie Lancaster Foundation.”

Tony Martin, General Manager at Afflecks, has granted free exhibition and sales space for the ‘Crimson Iris‘ exhibition throughout June comments: “Afflecks has always attracted a melting pot of cultures; it’s a hub of diversity, where people have always felt comfortable meeting without fear of prejudice.

We work hard to maintain Afflecks as a ‘haven’, where people from all walks of life can come and simply be themselves, so it felt only natural to offer The Sophie Lancaster Foundation the exhibition space for this collection – we welcome anyone who expresses themselves, be it through their appearance or their art.”

Rob’s paintings are designed to evoke feelings of hope, faith and anger, and are inspired partly by Sophie. While the paintings together to tell a story, each one also stands up on its own with its own meaning. “The collection is a riddle, whereby each one makes individual sense”, says Robert,  “but it is only when they are all together that the story is in some way visible.”