By Editor
By Editor November 16, 2022 Culture, News
No Comments 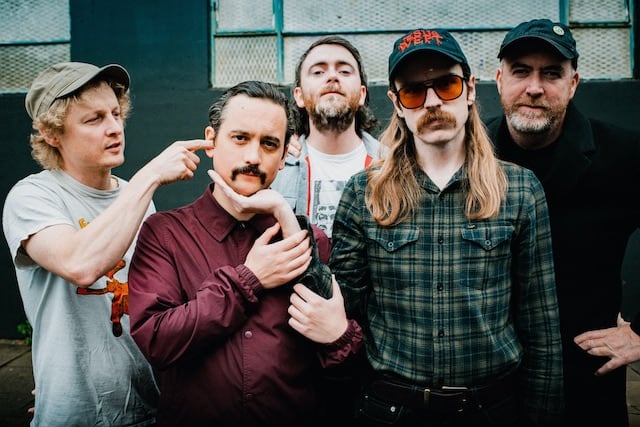 The video comes courtesy of artist Wilm Danby, known for his paintings and video art for the likes of Palace, Unknown Mortal Orchestra and Bullion. “When I first heard the track, I immediately felt a kind of forward motion, like being pushed forward by an unknown force in a nightmare, toward an unknown thing/place, floating but with no control. Scary but fun…” says Danby. “On repeated listens, it became sort of a mantra with riffs, about transcending fear through some kind of ritual or rite of passage. I wanted to make that ritual happen, to see what it could look like, and if it would work!”

‘Mr Medicine’ is a “song written to be a sonic arrow, purposefully succinct with no fat and no detours,” writes guitarist and producer Sam Grant. The result is something as immediate, incessant and directed as Pigs have ever gotten – the audio equivalent of sticking a fork in plug socket.

“Music is a powerful medicine and it should be consumed daily for mental wellbeing. Mr Medicine’s faithful and highly regarded colleague is Doctor Gig, who we also have on speed dial,” vocalist and lyrics Matt Baty explains. “Lyrically I suppose the sentiment is not too dissimilar to Sister Sledge ‘Lost In Music’, only galvanized by heavy, heavy doses of distortion and really big drum fills.”

The group has also announced two new U.S. tour dates, performing in Brooklyn on March 11th at Saint Vitus and Los Angeles on March 21st at Zebulon. Tickets are currently on sale here. They will also be performing in Austin at SXSW in 2023.

Land of Sleeper is the heavy-psych/garage-rock band’s fourth studio album and follows 2020’s Viscerals, which Under The Radar described as a “sense bludgeoning amalgamation of metal, punk, and experimental noise at its most brutal,” while Louder declared it “Utterly enthralling.” Kerrang writes, “melding the fuzzed-up, stripped-back muscle of heavyweights like Black Sabbath and Motörhead to progressive sludginess, then pouring on a generous helping of the wryly abstract humor of IDLES, this third album is a strange, unruly offering.”

Whether dwelling in the realm of dreams or nightmares, the primordial drive of the band is more powerful than ever. Land of Sleeper, their fourth record in a decade of riot and rancor, is testimony to this: the sound of a band not so much reinvigorated as channeling a furious energy, which only appears to gather momentum as the band’s surroundings spin on their axis.

“Shouting about themes of existential dread comes very naturally to me, and I think because I’m aware of that in the past I’ve tried to rein that in a little” reckons Matt. “There’s definitely moments on this album where I took my gloves off and surrendered to that urge.”

Whether this means Pigs, a band once associated with reckless excess, have taken a darker turn to match the dystopian realm of the 2022 everyday, is open to debate. The band themselves aren’t necessarily convinced; “Sobriety does funny things to a man” reckons guitarist Adam Ian Sykes wryly.

“I know from my perspective, I was trying to write some much heavier and darker music” says guitarist and producer Sam Grant. “But this was an aim more as a counterpoint to earlier material, as opposed to any sort of political or social commentary. I still very much see these heavier moments as musically euphoric, and emotionally cut loose or liberating.”

“For obvious reasons, the anticipation for the writing of Land of Sleeper was unlike anything we’d felt before” Adam adds. “These sessions were an almost religious experience for me. It felt like we were working in unison, connected to some unknowable hive mind.”

For all that, the last few years have seen Pigs’ stature rise in the wake of triumphant festival slots and sold-out venues alike, this remains a band, consummated by bassist John-Michael Hedley and returning drummer Ewan Mackenzie, who are fundamentally incapable of tailoring their sound to a prospective audience, instead standing alone and impervious as a monument of catharsis.

“Writing and playing music is often surprising and revealing, it can be like holding up a mirror and seeing things you didn’t expect to see” reckons Mackenzie. “For me, the darker tracks on the record hold in common a determination not to lose faith, despite the odds.”