Father/Daughter Records and Big Scary Monsters are thrilled to release a new single from Brooklyn trio Proper., titled ‘Red, White and Blue’. The Bartees Strange-produced track is the first taste of an upcoming 2022 album from the band. The song marks Proper.’s first release on Father/Daughter Records, who have teamed up with Big Scary Monsters to co-release new music from the band. 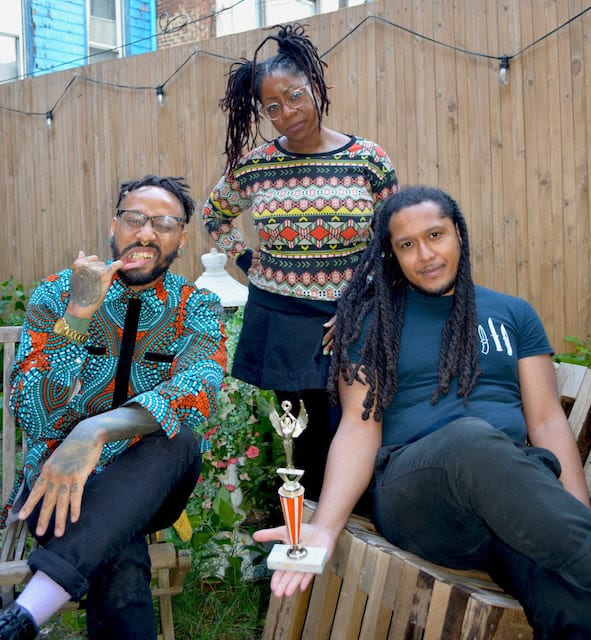 Proper. embark on a US November tour with Glass Beach and Home Is Where this Saturday. In December, they will support The Wonder Years on a run of East Coast shows, and the band head to the UK in for a nationwide tour in April 2022.

“A lot of millennials in my life share the sentiment that being American feels like being in an abusive relationship that you can’t find the courage to leave. Uncle Sam is this charming older man that you find yourself drawn too and only realize way too late into the game what you’re really dealing with,” explains Proper.’s vocalist/guitarist Erik Garlington of the meaning behind ‘Red, White and Blue’. He continues, “I knew I wanted to focus on looking at what makes this country what it is, and how hopeless I feel to stop it. The song started as me just wanting to write something you’d hear if At The Drive-In collaborated with early Paramore. I had the 5/4 riff that ended up being the bridge, that ‘Misery Business’-esque chorus chord progression.”

Proper.’s 2019 sophomore album I Spent the Winter Writing Songs About Getting Better was released on UK-based label Big Scary Monsters, and caught the attention of Father/Daughter as well as receiving praise from Pitchfork, The Independent, Brooklyn Vegan, Under the Radar, and Afropunk and more. The two labels will release a full length from Proper. in 2022, more details will be announced in the new year. Erik says of their decision to sign with Father/Daughter, “We’re so excited and grateful to join a roster full of talented and diverse artists. Our main mission has always been to push the genre forward with like-minded folks and we’ve found the perfect fit in F/D to keep pursuing that goal.”