QUEEN KWONG confronts Betrayal, Mortality, and Divorce on “Couples Only”

“I don’t play music because it’s fun. It’s a coping mechanism. It’s for survival. I have to keep playing music because it’s my way of allowing myself to feel,” says Carré Kwong Callaway—aka Queen Kwong about her new album Couples Only which will be released on July 12, 2022 via Sonic Ritual. The first single “I Know Who You Are” is released today and is, at once, a revelation of the ugly truth as it is a triumphant separation of toxicity between intimates. For stream or purchase HERE. 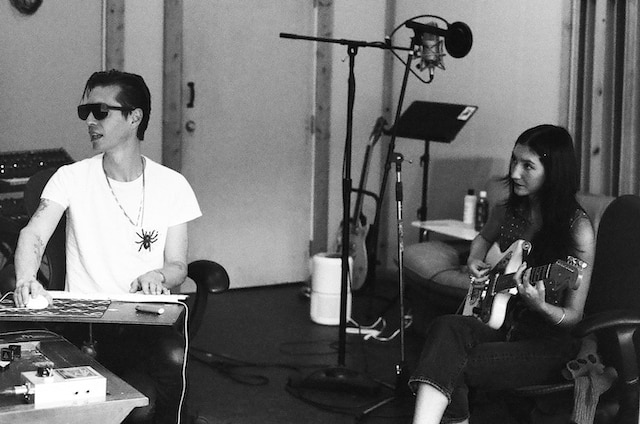 Pelted with chugging rhythms and blasts of searing guitars, “I Know Who You Are” features Carré’s raw and accusatory vocals, swinging with a razor sharp midnight swagger. Couples Only is an outpouring of pure feeling and visceral thought that not only captures every emotion that comes with both the grieving and recovery process, but also looks at the hourglass of existence with a shorter shelf life than most. She had been diagnosed with cystic fibrosis mere weeks before her divorce and told she may only have a decade left to live.

It’s a fearless account of facing the worst betrayals and accepting the deepest losses. It’s the realization of one’s mortality and the impermanence of everything we know and cherish. But, ultimately, it’s a testament to the endurance of the human spirit. Because while this record is unashamedly about the darkest period of Carré’s life, it doesn’t wallow. It can be accusatory and violent, but there’s no time wasted on self-pity.“It’s not a fun album,” Carré admits, “but, at times, it’s a funny one.”

As with every Queen Kwong release, all music for the upcoming album was entirely improvised and recorded on the spot—nothing was pre-written lyrically or musically. A primal scream of freestyled lyrics that contain the anger, fury, frustration and sadness that was dealt to her in a quick succession of events that started with a diagnosis of cystic fibrosis in 2018, the dissolution of her marriage two months later that left her exiled with nothing but a suitcase and two guitars.  “I was homeless for nearly a year, just living on friends’ sofas, and I’m still in the process of rebuilding my life,” she says, “but it’s reassuring that we can survive things that feel unsurvivable.” Unleashing this pent-up energy for the album has been purgative for her.

From the stinging but breezy singalong “The Mourning Song” (which also serves as a humorous clap-back at her ex-husband) that tells, very bluntly, the story of how she lost everything but how she kept going anyway, to the unabashedly poppy and chiming “Without You, Whatever” that recalls Hunky Dory-era Bowie. There’s also the meandering doo wop R&B shuffle of “On the Run.” Couples Only is a fascinating journey through the darkest reaches of her experiences in the last few years with vitriolic spittle and sarcasm with a snide smirk. “It makes you realize what truly matters, and the things that don’t matter end up meaning even less. It frees you from a lot of bullshit,” she snickers.

Needless to say, Couples Only is Carré setting the record straight, and across these 11 songs, she takes no prisoners.  It will be released on July 12, 2022 via Sonic Ritual.