Tigercub return with ‘The Perfume Of Decay’

Home » Tigercub return with ‘The Perfume Of Decay’

Brighton-based rock ‘n’ roll trio Tigercub has returned with their hard-hitting new single, “The Perfume of Decay,” available now at all DSPs and streaming services. “The Perfume of Decay” marks Tigercub’s debut release for Loosegroove Records, the label co-founded by Pearl Jam guitarist Stone Gossard, a longtime champion of the band. 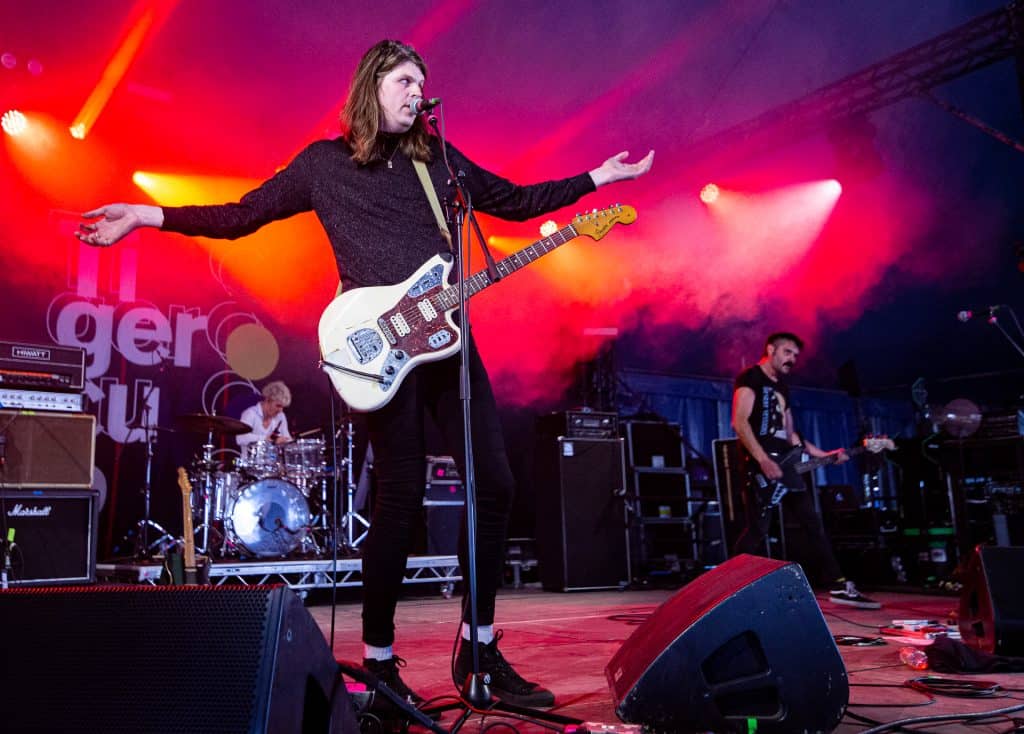 “They say comparison is the thief of joy,” says Tigercub’s 7-foot frontman Jamie Hall, “and nowhere is this more acutely felt than on the internet; the public ledger where I must amend my social cv daily, to portray my life to others in the most rose tinted & ineffable way possible. The reality couldn’t be further from the truth of course, beneath this facade I am crumbling, cascading into despair and at odds with my emotions. ‘The Perfume of Decay’ is my expression of this feeling, an argument between affectation and naturalness. It marks the beginning of a new era for us – this is Tigercub at its heaviest, its most accomplished, and most unapologetic.”

“Jamie Hall is not only an incredible songwriter, singer, and fucking wicked guitarist,” says Stone Gossard, “but he also has a deep understanding of art and music history. This guy dabbles in it all — visual arts, digital media, world history. This band is generational, and Jamie’s a natural star. Loosegroove couldn’t be happier working with Tigercub.”

Tigercub’s music has always sounded larger than life, occupying an extreme space within a diverse range of influences spanning Led Zeppelin and Slipknot to Sonic Youth and Frédéric Chopin. Hall and his two bandmates — drummer James Allix and bassist Jimi Wheelwright — made a spectacular debut with 2016’s Abstract Figures in the Dark, instantly earning praise for their dynamic songcraft and lacerating musical power. 2021’s acclaimed As Blue As Indigo saw Tigercub pushing the boundaries even further, broadening their massive sonic palette while incorporating a deeply personal introspection which explored topics including anxiety, depression, toxic masculinity, the death of Hall’s grandmother, and the recent suicide of a close friend. The album proved the band’s popular breakthrough, ascending to #11 on the UK’s Official Albums Chart, while drawing international applause as one of the most electrifying rock releases in recent memory, with Guitar.com hailing it as “shaped by a determination not to compromise, made with tenacity and pride, and finished with a caustic bite.” “This is an expansive and experimental record,” wrote Kerrang!, “not just a twisting, twisted road through Hall’s own experiences, but also a rebirth of a maverick rock ‘n’ roll poet.”

As mind-bending and immediate on stage as in the studio, Tigercub celebrated As Blue As Indigo with a suitably epic live schedule, including a sold out UK headline tour, dates alongside longtime friends Royal Blood, and an inspirational North American run with Clutch and Eyehategod. This summer saw the band celebrating its signing to Loosegroove Records with show-stealing sets at the UK’s annual Reading and Leeds Festival as well as by joining Pearl Jam for their colossal two-night stand at London’s BST Hyde Park 2022.

Now, with “The Perfume of Decay,” Tigercub embark on the next stage of their amazing journey, confidently embracing all the contradictions, counterpoints, and catharsis of modern-day rock while heralding further new music in the weeks and months to come.

“It’s all about opposites,” Jamie Hall says. “Sweet-and-salty popcorn tends to taste better than regular popcorn, even though those are two opposing forces. I wanted to nail that concept with our heavy guitars, softer-sung vocals, Can-style grooves, and a bit of shoegaze. Counterpoints can come together and make a powerful connection. I’ve crossed the threshold from my 20s to my 30s, so I’m getting older, but I’m also entering my prime. This record is a reflection of that.”

tigercub the perfume of decay