Today, the worlds of music and boxing collide as two-time Heavyweight Boxing Champion of the World, Tyson Fury announces the release of his debut solo single released in aid of men’s mental health charity Talk Club. Talk Club is a talking and listening club for men, offering talking groups, sports groups and therapy for mental fitness. ‘Sweet Caroline’ will be released on 11th November through Warner Music UK’s EastWest Records. 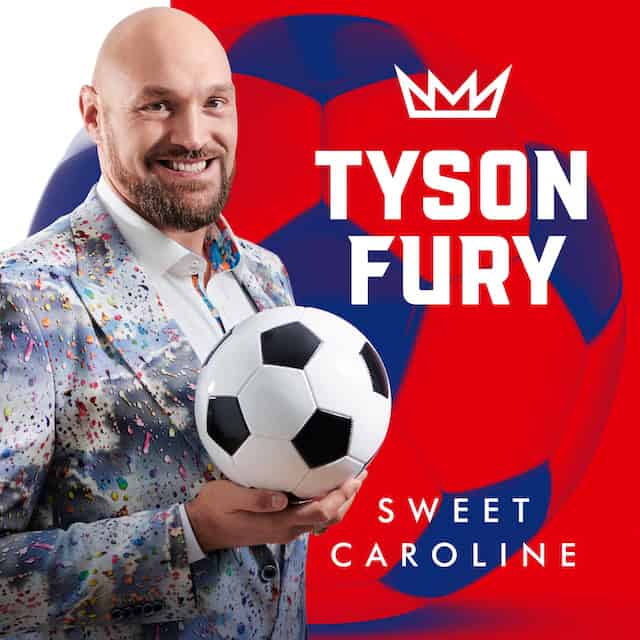 Neil Diamond’s classic ‘Sweet Caroline’ is well established as a fan favourite at UK sporting events and Tyson feels very connected to the track: “Sweet Caroline is a record I’ve always loved, and I’m excited to record and release it, and thanks to the folk over at Warner Music, they’ve given me the opportunity to do that, and what better time to release it than around the World Cup! I’m also proud to be partnering with the team at Talk Club who do such amazing work, it’s a great opportunity for me to give something back to Mental Health and hopefully continue to raise awareness for a cause that’s really close to my heart and if it helps England along the way in the World Cup, well that’s an added bonus.”

Tyson Fury is one of the most successful and popular boxers of all time and is currently the WBC heavyweight champion. Yet in spite of this he has had struggles with his mental health which are well documented, and he has used his fame to help others realise that help is out there. “Boxing has been a massive platform for me to spread the word on mental health and I have done it to the best of my ability. I have been very vocal about my mental health struggle, especially since my comeback. It has been widely printed about my highs and lows, ups and downs, so I’ve tried my best to keep talking about it as much as I can and keep trying to smash the stigma.”

This November will also see the FIFA World Cup in Qatar, with England fans of course having adopted ‘Sweet Caroline’ as an unofficial anthem; some might say that this release is Tyson’s ‘Good Luck’ message to the England team as they head out to Qatar.

Tyson has of course been no stranger to performing as he famously often takes to the microphone post-fight and during interviews to serenade the crowd with some of his favourite songs including ‘American Pie’, ‘I Don’t Wanna Miss A Thing’ and ‘Walking in Memphis’. He also appeared on Robbie Williams’ 2019 Christmas album duetting with the rock star on the track ‘Bad Sharon’.

Myn Jazeel, Senior Vice President, Rhino Records UK, said: “It’s a huge privilege to work with a true global sporting legend and to help bring to fruition Tyson’s desire to continue to raise awareness around mental health issues. Tyson has done a brilliant recording of this classic track and has the voice and charisma to do the song justice. He has been a pleasure to work with and I hope his fans, along with English football fans and the entire nation, get behind this record during the World Cup and into Christmas, as we try to raise money for mental health awareness. We’ve got a lot of exciting surprises lined up for this campaign, including a special dance remix – so keep an eye out for more to come on that very soon”.

Talk Club Co-Founders/Co-CEO’s Ben Akers and Gavin Thorpe said: “Suicide is the biggest killer of men under 50 in the UK. Tyson Fury is a champion, in and out of the ring to many of those men. Men see themselves in Tyson, so when he talks (or sings) they listen. So to be partnering with Tyson on something that raises the awareness of Talk Club, and gets men talking and improving their mental fitness, will save lives.”

Tyson Fury’s ‘Sweet Caroline’ will be available on 11th November. The track was recorded at British Grove and Air Studios and produced by Guy Chambers and Steve Power.