Al Jourgensen has announced that he will be working with The Mission UK‘s Mark Thwaite on several new projects. 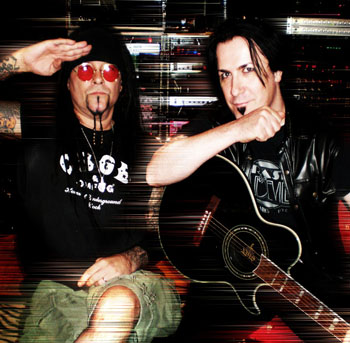 Jourgensen and Thwaite, who were both long-time friends of Killing Joke and Ministry bassist Paul Raven, who passed away October 20, 2007, joined forces recently at Jourgensen’s 13th Planet home in Texas on RevCo projects and another side-project.

Thwaite has worked previously with RevCo on ‘Sex-O MiXXX-O‘ where he worked on ‘Abundant Redundancy (Dambuster Metalmorphosis Mix)’. The artist has also worked with RevCo guitarist Sin Quirin on ‘Filthy Senoritas‘, for the upcoming RevCo release slated for Spring 2010.

Jourgensen and Thwaite will work together on a Christmas song in tribute to Paul Raven. It will be released in November and placed on Ministry’s MySpace.

Jourgensen told LA Weekly about his plans: “I’m working on a solo record right now, which is not metal at all. I’m working on it with Mark Thwaite from Mission UK. He’s playing guitar with Peter Murphy right now. Me and him are doing my solo record and it’s really poppy stuff. All the metalheads are going to be like, ‘This sucks!’ Whatever. We’re having fun with it. I’m really happy with it. Mark just left today. He went to LA because he has to go on tour with Peter Murphy. He’ll be back in November and then we start on it again. We have one song done that’s a Christmas song. It’s really uplifting, Merry Christmas to everyone, you fuckers. It’s good. As a matter of fact, that’s going to be released on iTunes on December 1. Ministry‘s first Christmas song.”