After raising $1.2m in her highly publicised campaign through Kickstarter, Amanda Palmer has jumped on board with Cooking Vinyl Records (The Cult, Marilyn Manson). The label will handle the distribution, project management, marketing and promotional services for her forthcoming album across the UK and Europe. 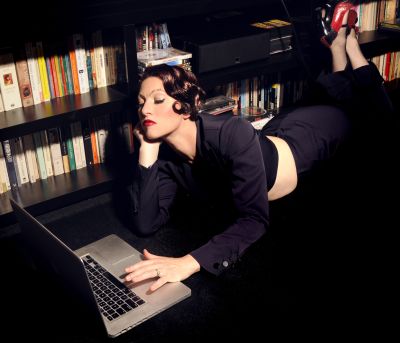 Her first studio album in four years, ‘Theatre Is Evil’, will be globally released through her own label, 8ft Records, using Cooking Vinyl as her ‘boots on the ground’ in European territories.

The deal sees Palmer retain 100% of her rights and make the lion’s share of the money. Amanda also retains full artistic control over the campaign, and has hand-picked her own publicity firm for Cooking Vinyl to work with in many of the major European markets. Her management team, Girlie Action, will handle all label functions in the USA.

Palmer stunned industry cynics and hit the headlines recently as she raised over one million dollars to fund ‘Theatre Is Evil’ exclusively from Direct To fan presales. Drawing on a devoted fanbase and an exceptionally strong online personality, Palmer used the online crowd-funding platform Kickstarter to attract purchases from $1, in return for a digital download, to $10k+ pledge for which the fan receives deluxe full band party and photoshoot. The presale campaign on Kickstarter will be used to fund her global marketing campaign including at least four music videos (one by legendary director Tim Pope) and deluxe album packages for her loyal fans – a full spending breakdown can be found on Palmer’s blog.

Recorded with her band, The Grand Theft Orchestra, ‘Theatre Is Evil’ is arguably her most pop-influenced album yet. Written over the course of several years (since the release of her last studio album, Who Killed Amanda Palmer) and recorded in Melbourne with producer John Congleton (St. Vincent, Murder By Death, Modest Mouse, Xiu Xiu), the album offers a collection of sounds and rhythms heavily influenced by the music Palmer grew up listening to – most notably 80s synth rock and britpop. After the European album release on September 10, Palmer will tour for two weeks in UK and Europe and return for a more extensive tour in March 2013.

Amanda Palmer said “My team looked at tons of options and the folks at Cooking Vinyl seemed like the best allies. I’m trying really, really hard to find the perfect, organic partnerships now that I’m free from Roadrunner – assembling people who really understand the importance of taking the big picture, the future, the fans’ experience and the art itself into account, instead of ‘moving units’ with blinders on.”

Commented Martin Goldschmidt, Founder and MD of Cooking Vinyl Group “I am proud to welcome Amanda to Cooking Vinyl, as well as being a fantastic artist she is very forward thinking in approach to the business. Our relationship is not a traditional record deal and reflects her ethics.”