Australia’s PyroMusic.net recently conducted an interview with vocalist Cristina Scabbia of the Italian rock/metal band LACUNA COIL. A couple of excerpts from the chat follow below. 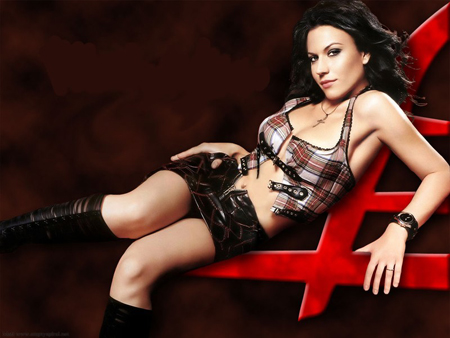 PyroMusic.net: [LACUNA COIL‘s upcoming Australian tour] going to be a bit of a prelude to the [band’s new] album [“Shallow Life”]. When can we get our hands on it?

Scabbia: We don’t actually have a release date yet. We are thinking of spring

. And of course when we know, we’ll let everybody know! But you know how is it, with marketing plans and everything… the album is recorded. We did our job already. It’s just a question of organizing everything from the label and promoters and… it’s a complicated thing. It’s a question of putting everything together.

PyroMusic.net: You are working with a different producer this time, I understand.

). We recorded the album last yea

r. We’re definitely happy, because, as you were saying, you were talking about the little bit of darkness in our music, but to be honest when I listen to our stuff, I can hear a lot of different influences. There is not gothic metal or power metal or classic metal. There is a mixture between rock, a little bit of metal and a little bit of gothic. It’s something completely different. It’s really difficult to classify. We’ve been classified as a goth metal band because we like to dress in black and when we started we were really influenced by bands like PARADISE LOST and TYPE O NEGATIVE. We were clearly in the dark side of music. But I think we have changed so much that it’s really difficult to give a name to our music. And the new album will be even more rock than in the past!

PyroMusic.net: And you chose to do a cover of a very sophisticated pop act on “Karmacode” when you did the DEPECHE MODE cover [“Enjoy The

Silence”]. Do you think that surprised a lot of people, and is that an exploration of what we can expect from the new album?

Scabbia: No, no, no, no. That cover does not represent in any way the sound of the new album. When we chose to do that song, we specifically chose a cover that everyone could sing on the concerts. Everybody knows “Enjoy The Silence”… DEPECHE MODE, we definitely like the band even if it’s not one of the first influences on LACUNA COIL at all. Like, our bass player writes most of the music and he’s not interested at all in them. So we basically did that song because of that, an

d people liked it so much that we made a single out of it. But it was not our intention. The new album is completely different. It is definitely the next step for LACUNA COIL. There is some stuff that sounds similar to the old albums we did, but on the other side, as I said, there is a stronger rock side that makes every song more powerful and in-your-face.

Read the entire interview from PyroMusic.net.

“Shallow Life” will be LACUNA COIL‘s first concept album as all the songs address superficiality and the discontent and unhappiness it can cause. “It’s more against the superficial lifestyle in general, but not regarding celebrities,” singer Andrea Ferro previously told Rock Sound magazine. “You can talk about celebrities

, but you can also talk about everyday people. It’s more a reflection on life itself, and especially on the way you lead your life in a superficial way.”