Fourth album on the way from This Is Hell

Home » Fourth album on the way from This Is Hell

This Is Hell have announced details of their fourth studio album, which is out in October. 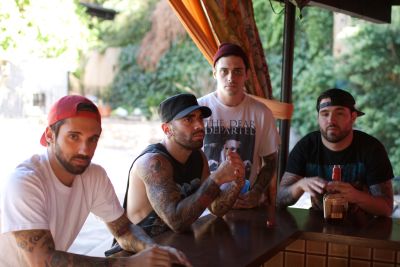 The upcoming release of ‘Black Mass’ is heralded by a website which includes an audio link to the album’s title track.

The ten-track LP contains the heaviest songs the band has written and recorded, according to guitarist Rick Jimenez. He adds, “The new album takes the crossover and metal influences from last album to much greater extremes.”

“Lyrically this album touches on issues we haven’t dove into before. Social injustice as a whole is a recurring theme. Persistence and empowerment are familiar themes with us that I’ve revisited, but with an even more aggressive outlook than before,” Jimenez continues.

The album’s artwork is designed by UK illustrator Will Blood. “The concept came from some lyrics and underlying themes from the album and Will really took the ball and ran with it. Whether someone takes the art at sheer superficial face value, or really absorbs the details and subtleties of it, it’s an extremely powerful piece of artwork. I feel the same way about the music and especially the lyrics on this new record,” says Jimenez.

‘Black Mass’ by This Is Hell is available from October 10 on Rise Records.