Ideal for your little feet working the machine?

Home » Ideal for your little feet working the machine?

They extolled the virtues of “lead Nike shoes” in 2001, and over ten years later, Gorillaz are lending their name to another leading footwear brand and a new product range. 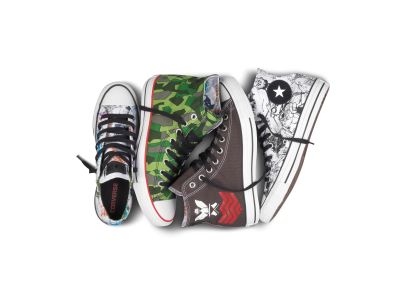 The virtual band have teamed up with Converse (who are owned by Nike, mind) to create four new designs for their Spring 2011 collection, which will go on sale on February 23.  Jamie Hewlett, the artistic tour-de-force behind Gorillaz, has created the patterns based on the personalities of the four members of the group.

Gorillaz are also contributing to the corporation’s ongoing ‘Three Artists: One Song’ project, alongside André 3000 of OutKast and James Murphy of LCD Soundsystem. Their collective track is due for release on the same day as the shoewear line.