The Misfits are back with new album ‘The Devil’s Rain’

That’s right folks. The ‘Fits return with their first full-length release of all-new, original material in nearly a decade! Rooted in the horror and sci-fi themes their audience craves, ‘The Devil’s Rain’ showcases 16 tracks including ‘Twilight Of The Dead’, ‘Dark Shadows’, ‘Curse Of The Mummy’s Hand” and the title track ‘The Devil’s Rain’. The album is out on November 7 via Megaforce Records. 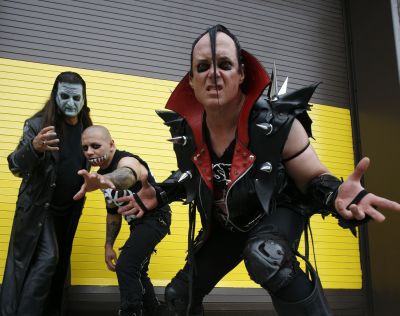 Produced by Ed Stasium, (who’s credits include the Ramones’ ‘Road To Ruin’ and ‘Too Tough To Die’, as well as the Misfits’ 1999 release ‘Famous Monsters’), the album showcases a twopanel front/back cover painting featuring the rebirth of the band’s iconic ‘Fiend’ mascot in an epic setting rendered by Arthur Suydam (known for his immensely popular work on the Marvel Zombies series, among others). The packaging, designed to emulate a CD sized gatefold LP, also features some new Misfits portraits shot by the legendary Mick Rock. Rock’s imagery has become part of the very fabric of rock ‘n’ roll. Having also served as an on-set photographer for cult-movie classic ‘The Rocky Horror Picture Show’, Rock lends a perfectly suited eye to view the band’s surrealistic and highly theatrical persona. ‘The Devil’s Rain’ is not just a continuation of a historic legacy, it’s a total reboot ushering in a new era of terror. In a sense, it’s the debut album from the legendary Misfits of this decade. From fans of their classics, to newcomers discovering the band for the very first time, ‘The Devil’s Rain’ sets the bar, and redefines the ferocity and melody that has made the Misfits omnipresent and immortal.

The Misfits have been preserved on determination bound by unequalled loyalty to their fiends and the sheer will to survive. “It’s been over 30 years and 30 years from now, people will still be playing our albums because we will never water down what we do,” Only says. “Our goal is to keep perspective on who we are and always stay true to ourselves. The new album will only reinforce how potent the band has become with time. We plan to continue as always, to eclipse the past, block the sun and drag humanity by the throat into a world of darkness filled with ghouls, goblins and creatures of the night, where we are king.”