Murderdolls are streaming a brand new track from their forthcoming album, ‘Women And Children Last’ now at www.roadrunnerrecords.co.uk. 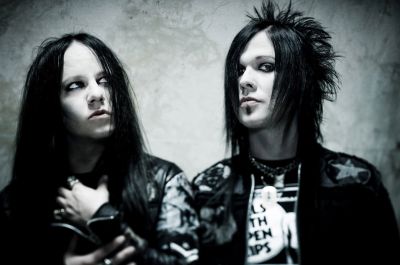 This is the first new music from the band since the release of 2002’s ‘Beyond The Valley Of The Murderdolls’, which shifted silver status on its release and has now racked up over 80,000 sales. ‘Women And Children Last’ comes to stores on August 30.

The track ‘My Dark Place Alone’ is streaming now, in advance of a free MP3 giveaway of the track, which will commence at 4pm UK time June 22 at www.roadrunnerrecords.co.uk and last for 48 hours. For anyone who misses the giveaway, the track will be available as a digital single from July 4th on iTunes and all digital retailers.

Lead guitarist Joey Jordison comments: “I consider ‘Women And Children Last’ the first Murderdolls record.” He adds: “The music is so much heavier now. Murderdolls haven’t lost the fun, crazy vibe, but the topics are smarter. ‘Beyond The Valley Of The Murderdolls’ was like a sketch and this is the real painting.”

Vocalist Wednesday 13 says: “It’s definitely personal. I’ve been doing campy horror lyrics since I was 15-years-old so I wanted to expand beyond that. For the new Murderdolls, I wanted to keep the humour and violence intact, but I wanted to show a different side of the band. I’m singing about life this time, instead of Dracula. If you really want to get down to it, we’re a sex-drugs-rock-n-roll band more than anything.”