My Ruin, the Los Angeles based band featuring the husband and wife rock duo of vocalist Tairrie B Murphy and multi-instrumentalist Mick Murphy, have posted their new sixth studio album ‘Ghosts And Good Stories‘ streaming in the music section on a new blog. 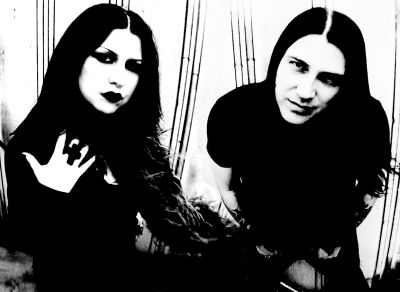 Co-produced by Mick Murphy and Josh Lynch, the new album boasts 13 tracks written and played entirely by Murphy on guitar, bass and drums. According to vocalist Tairrie B, “We were told by Tiefdruck-Musik that ‘G&GS‘ was originally set for release in August and given several dates which we used to promote the release online and in magazine ads but it seems things are always changing behind the scenes without our knowledge. Our record became available to download on iTunes August 20, but none of the following dates scheduled actually happened at that time.Thankfully our album is finally starting to arrive in stores and to many people who have pre-ordered it  but there are still territories where it is not yet available even though it’s been ordered so we are currently trying to suss this situation with our distribution companies and label and hope to have things sorted soon.

“With that in mind, we have decided to stream ‘G&GS‘ in full this past week as a gift to our friends and fans who have been so supportive to us through the bull we have been forced to deal with due to circumstances beyond our control such as our September tour [which was set to kick off this weekend in the UK and continue throughout Europe] being postponed last minute. We have also decided to take things into our own hands once again and are in the process of re-booking the tour for 2011 with the first rescheduled date recently announced as March 11th at The Underworld in London.

“My Ruin have always had a DIY spirit and aesthetic which we’re very proud of. It keeps us focused and deterimined to keep going and just do what we do. In this day and age when so many bands pack it up and break up after a couple records we feel blessed to be able to continue to make music we love and share it with those who want to hear it ten years in, never letting the assjacks who have tried to sabotage and stop us along the way win. While there is always a certain struggle, there is also a certain satisfaction that comes with being an independent band and holding your album in your hand knowing you poured your hearts, souls and selves into the making of it from top to bottom. The new digipack we created was inspired by the vintage cover photograph of my grandparents from the early 1900’s and includes a beautiful 16 page booklet and a film noir style enhanced behind the scenes studio movie that we filmed and edited ourselves documenting the making of the album in a unique way.We’re getting some of the best reviews of our career at the moment which reminds us that all of our efforts have not gone unnoticed and we appreciate people listening to our new album with an open mind this time.”

For more information visit the official My Ruin blog.