Festival season is well and truly underway – we’ve had good times at UK festivals such as Download, Sonisphere, Slam Dunk and 2000 Trees already, but August sees us looking abroad to Budapest for Sziget Festival. It’ll be Soundsphere’s fourth time at the week-long event, which takes place on Óbudai Island, slap bang in the middle of the Danube river. The island becomes known as “The Island Of Freedom” for the duration of the event, as people from all across the world descend upon Sziget for a guarantee of good weather and good times. 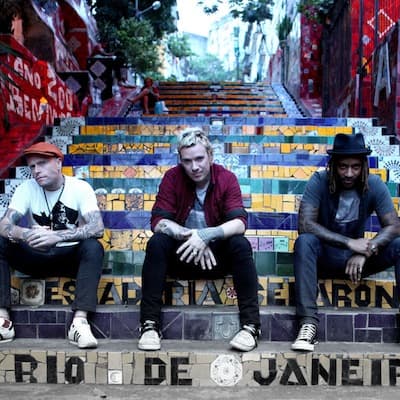 There are plenty of big name acts across all seven days of the festival, but who are the Soundsphere team most looking forward to seeing? Well, let us tell you.

We love The Prodigy here at Soundsphere, we do. Their performance at this year’s Sonisphere Festival proved that their dance-rock fusion has still got what it takes to get crowds moving, and they’re sure to be welcomed back to Sziget after their hit-packed set in 2011 (incidentally, the first year we visited the festival). Not a performance to be missed – you can catch them on Saturday night (August 16).

Unless you’re a fan of Wild Beasts, of course, as the two bands provide the weekend’s most awkward clash for our crew. The band have gone from strength to strength since the Mercury-nominated ‘Two Dancers’ – ‘Smother’ was a sublime, emotionally devastating record, and new album ‘Present Tense’ is another collection of atmospheric, intelligent songs. If you don’t fancy getting your rave on when Saturday night (August 16) rolls around at Sziget, then Wild Beasts provide an unmissable alternative.

Sziget fans have long been clamouring for pop-punk legends Blink-182 to play the festival, and this year their wish is granted, as the band will headline the very first day of the festival (11th August). Expect a career-spanning set and maybe even some new material from the Californian trio.

Queens Of The Stone Age

The rock doesn’t stop there though, with Queens Of The Stone Age appearing on the festival’s main stage on the Tuesday (August 12). Josh Homme and co are always a force to be reckoned with, and they don’t show any sign of slowing down if last year’s ‘Like Clockwork’ LP is anything to go by.

After disappearing for the best part of 4 years, Klaxons are back with their new LP ‘Love Frequency’, and it’s pretty much a love letter to old-rave. They’re sure to get the Sziget crowd moving with their late-night set on the A38 stage on Friday (August 15).

Oh, but there’s so much more on offer. Fans of rock and punk can look forward to performances from the likes of Placebo, Korn, Jimmy Eat World, Brody Dalle, A Day To Remember, Anti-Flag, Triggerfinger, Band Of Skulls and NOFX, while dance heads will be will catered for by sets from Deadmau5, Skrillex, Calvin Harris, Darkside, Axwell, Fedde Le Grand, Kavinsky, Crystal Fighters, Bonobo, The Bloody Beetroots, La Roux, Mount Kimbie and Borgore. There’s a strong hip-hop & rap contingent featuring the likes of Outkast, Macklemore & Ryan Lewis, Kelis, Cee-Lo Green and Angel Haze, but if you’re more of an indie fan then Bombay Bicycle Club, London Grammar, Jake Bugg, Imagine Dragons, Bastille, The 1975, Miles Kane, The Big Pink, Jagwar Ma and Girls In Hawaii might be more appealing. Add a handful of singer-songwriters – Lily Allen, Tom Odell, Michael Kiwanuka, Fink – and a dash of ska – Madness, Ska-P – and you’ve got a lineup with something for everyone.

And that’s only the main two stages – check out the full program for more information on the dance-focused Colosseum, the Blues and Irish stage, the World Music Stage, and the Europe stage – the latter of which features some of the continent’s hottest up-and-coming talents. There’s also many other activities on the island, whether you want to relax at the Sziget Beach, stay active at the Sports Park, take a ride on the Sziget Eye, or get lost in the mysterious Tarot Labyrinth.

For more information and tickets, check out the official Sziget Festival website.