RAM, the traditional Gothenburg, Sweden-based heavy metal band featuring Morgan Pettersson (ex-B-THONG), has completed work on its second album, “Lightbringer”. The follow-up to 2005’s “Forced Entry” was produced by Johan Reivén and was mixed at Studio Bongo in the group’s hometown. 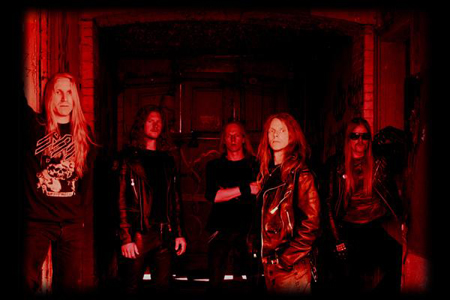 Commented the band: “Compared to ‘Forced Entry’, the ‘Lightbringer’ album is a step in many directions for us. ‘Forced Entry’ was a very straightforward (in RAM terms) heavy metal album. ‘Lightbringer’ is more concept-orientated and it displays an array of different themes that are noticeable in song writing, lyrics and throughout the production. Including a horror mantra that features Mexican poet Adelaida Caballero performing one of her profound, surrealistic and magick poems, this album offers hard and heavy but quite unorthodox heavy metal songs that features many twists and different parts, along with melancholic and very melodic pieces. E from the infamous b

lack metal band WATAIN is featured on one track which is a modern heavy black metal track and he lays down some sinister vocals indeed. Something as unusual as a metal horror opera, ‘The Elixir’ features a macabre tale in vein of Edgar Allan Poe‘s work. Our most epic track to date and also the longest RAM song ever recorded is a song about the battle at Suomussalmi in 1939 during the Finnish winter war.”

re handled by Göran Finnberg.

RAM is among the artists featured on the “New Age of Iron Vol. 1 (Teutonic-Swedish Alliance)” 12″ vinyl release, which came out in November 2007 via Iron Age Records. The LP features five brand-new tracks and one rare and never-before-released song by the finest acts on the current Swedish and German