The Rapture return with a new single ‘Sail Away’ taken from their acclaimed third album ‘In The Grace Of Your Love’. 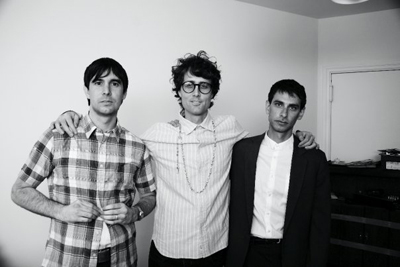 It follows on from dancefloor smash ‘How Deep Is Your Love?’ and will be released as a special remix EP featuring new mixes courtesy of Aeroplane, Cosmic Kids and Cut Copy. Described by The Times as “euphoric widescreen pop” ‘Sail Away’ has quickly become a live favourite amongst fans thanks to its hypnotic and anthemic refrain.

The band is also sharing the video for ‘Sail Away’, directed by Kris Moyes. The video follows the band on a fantasy-ride through the streets of Brooklyn, with Luke Jenner sailing the streets on a silver mylar pillow!

UPDATE (JANUARY 13): The ‘Sail Away’ EP is available from next Monday (January 16), postponed from its original December release.  Meanwhile, it’s been confirmed The Rapture are performing at the Coachella Festival in Los Angeles this April, which will be preceded by shows in Oxford and London at the start of that month.