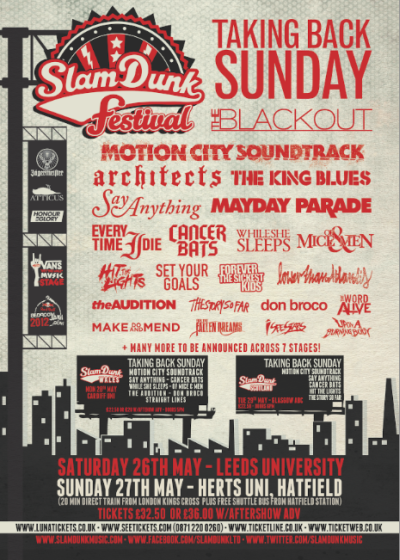 The full list of bands added now is as follows: The Blackout, Motion City Soundtrack, Say Anything, Hit The Lights, The Story So Far, Lower Than Atlantis, While She Sleeps, Of Mice & Men, Don Broco, The Word Alive, For The Fallen Dreams, I See Stars, Upon A Burning Body. The Blackout says: “Slam Dunk has always been a great festival to play. It’s just a massive party. We’re super excited to be playing it again and there are some cracking bands playing that we’re all excited to see too.”

Announcing their first UK shows in quite a while, Say Anything’s Max Bemis happily adds “We are so very excited to return to the UK on such a great bill… It’s literally one of my favorite places to play shows in the world. We’re honored!” Slam Dunk is also happy to welcome another UK exclusive of a European tour package of hotly tipped metalcore quartet The Word Alive and their supports, For The Fallen Dreams, I See Stars and Upon A Burning Body.

Full details of the other shows in Wales and Scotland are below:

Tickets for those extra shows will go on sale March 2.

The Hatfield site is 20 minutes direct for London Kings Cross and a free shuttle to campus will be supplied.