Smashing Pumpkins “If It All Goes Wrong” Trailer

Home » Smashing Pumpkins “If It All Goes Wrong” Trailer

A new video trailer featuring segments of the upcoming “If All Goes Wrong” double DVD commemorative package celebrating the recent reunion and extraordinary 20-year career of the SMASHING PUMPKINS can be viewed here. 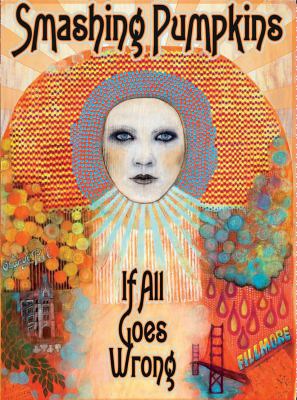 Due on November 11 via Coming Home Media, the two-DVD set was directed and produced by Jack Gulick (BRUCE SPRINGSTEEN, METALLICA, STEVE MILLER BAND, GODSMACK) and Daniel E Catullo III (STEVE MILLER BAND, GODSMACK, RUSH, DAVE MATTHEWS BAND) and contains the 105-minute documentary, also titled “If All Goes Wrong”, plus “The Fillmore Residency”, a full concert filmed in late July and early August of 2007 over five of the 11 sold-out nights at the famed Fillmore Auditorium in San Francisco, California.

The concert disc was captured in 5.1 Surround Sound and state-of-the-art high definition from 12 cameras and features seven all new tracks not available anywhere else, along with new versions of fan favorites and a selection of PUMPKINS rarities.

From the opening note to the final chord, the documentary “If All Goes Wrong” showcases a band returning with an “enveloping epic force” (Los Angeles Times) as it traces the SMASHING PUMPKINS during their 19-show residency, which began with eight shows at Asheville, North Carolina’s Orange Peel in late June and continued through 11 sold-out nights at San Francisco’s famed Fillmore Auditorium. Interviews with band members, fans, journalists and fellow musicians reveal the fears, excitement, determination, exhaustion and tension inherent in main singer-songwriter and lead guitarist Billy Corgan and his newly revitalized musical unit.

“We went into the residencies hopeful to play some new music, with the idea I would write during the day and we could maybe even play new songs that same night,” Corgan comments. “What I didn’t anticipate is how much the process would inspire me, positively and negatively, to report what I was seeing and feeling from the shows. The documentary shows that process in an interesting way that reveals the link between the band and our audience.”

The documentary also includes “Voices Of The Ghost Children”, a featurette about the band’s fans, and an interview with THE WHO‘s legendary guitarist and songwriter Pete Townshend as bonus material.

The concert portion of “If All Goes Wrong”, entitled “The Fillmore Residency”, runs 115 minutes and includes seven of the almost 20 all-new compositions the band composed and performed exclusively during the residencies that are available exclusively on this release. With 15 songs in all, the concert — captured in 5.1 Surround Sound and state-of-the-art high definition from 12 cameras — showcases the band as they explore the freedom afforded to them in a live setting, including the 30-plus-minute opus “Gossamer”. Along with the new tracks, the concert also includes alternate versions of fan favorites and a selection of PUMPKINS rarities. “The Fillmore Residency” also includes five songs recorded live from the floor of The Fillmore that gives fans an intimate glimpse of the band as a performing entity.

Bonus Tracks: Live From The Floor Of The Fillmore

We will update you on an official UK release.