Brighton noise manipulators South Central are to release their debut album ‘Society Of The Spectacle’, which features Gary Numan and A Place To Bury Strangers. It is out April 4, via Egregore Records. 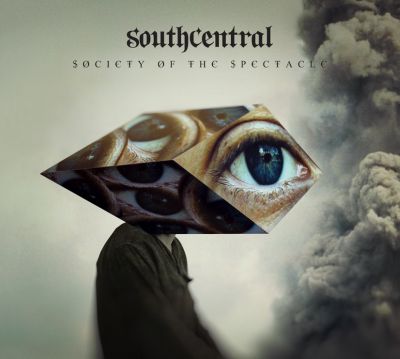 They have been increasingly in demand over the past year. Opening for Pendulum and The Prodigy, DJ’ing to Rage Against The Machine’s Finsbury Park crowd, spinning at Mixmag parties, then wrapping things up after Iron Maiden’s Sonisphere set. The duo is a true rave/rock crossover act, a band that blends elements of both, retaining a knack for riling up crowds from both camps.

Their show is a display of digital distortion and technical virtuosity, that sees songs sped up, slowed down, mashed into barely discernable pieces and then reconstructed for the climax. The pair pick endless samples from their hard drive while pushing a series of (often homemade) synths, pedals and keys.

Their 2009 collection of EPs and tracks ‘The Owl Of Minerva’, has jackhammer beats, swirling synths and titanic guitars establishing its status as a piece in the evolutionary journey of dance. They have been known to do the odd remix, with Klaxons, Metronomy, The Maccabees, The Prodigy and A Place To Bury Strangers to name a few.

In regards to ‘Society Of The Spectacle’, the pair admit that it wasn’t easy. “We’re control freaks,” Rob says, “we didn’t want to bang something out. It needed to be the right album. It needed to feel like art” so the two laboured hard to make sure everything was just right. Drums pummel down alongside ghost-in-the-machine synths; it is frantic and frenetic.

Gary Numan and A Place To Bury Strangers’ Oliver Ackerman both feature on ‘Crawl’ and ‘The Moth’ respectively on the album as guests. The former is reminiscent of classic ‘Are Friends Electric?’ while the latter very much fits into the APTBS sound.

The album as a whole conjures images of totalitarian dystopias and uncertain futures: “‘Society Of The Spectacle’ the book is about the unreality of reality, how the media changes your thoughts and so on, so a lot of the tracks relate to that stuff” Rob says. “The first track, ‘Nu Control’, is about the media controlling you. The record keeps repeating and repeating until you think ‘fucking hell, it’s doing my head in'”.

South Central hope to redefine the parameters of dance music. To show that one band member posing by a synth does not a crossover act make, and that intense BPMs can propel meaningful ideas.

8 – Paris In The Twentieth Century

11 – Society Of The Spectacle