Progressive metallers TesseracT go back to their roots with the release of an instrumental version of their highly acclaimed debut album ‘One’. Fans from the guitar forum days, where founder Acle Kahney and TesseracT begun, have been requesting instrumentals ever since the band rose from the internet to the clubs. 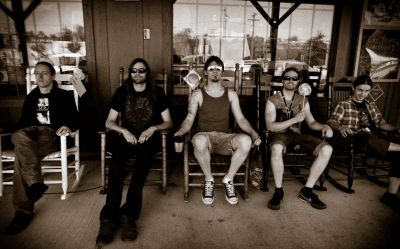 Bassist Amos Williams explains: “TesseracT began as an instrumental project in Acle’s filthy cat-ridden bedroom, so it has always had quite a strong instrumental focus. That’s not to say that we don’t enjoy vocals, we love them! But, it is worth noting that with every song we write, we like for it to be able to stand up on its own with or without vocals. We’ve always had the mind to, about six months after the initial release of ‘One’, to then release the instrumental version. It’s something that the fans have always asked us to do, and we felt now was the correct time to do so.”

One instrumental is out now via itunes.

TesseracT set off on the European leg of the Lowering The Tone tour (with vocals) on Saturday October 15 with Chimp Spanner, and then head to the US for the Saints And Sinners tour with Between The Buried and Me and Animals As Leaders.