The Blackout announce new album with video for ‘Start The Party’

The Blackout have announced their new album ‘Start The Party’ due out January 21, 2013. 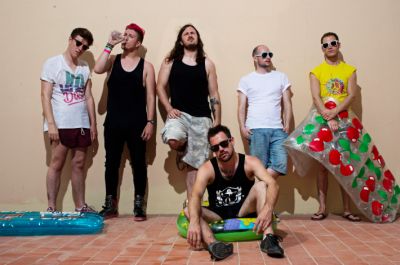 “Music can be a great form of escapism and we tried to fully encapsulate that with this record,” says vocalist Gavin Butler. “There’s a lot of bands out there at the moment that do deal with this depression and the sh** state of the world, but that’s just not us. We wanted to write about enjoying yourself and not worrying about things. Take a half hour out of your life, switch off and hear something fun!”

Recorded in the heart of the West Country at The Distillery Studios with former A vocalist and long-time collaborator Jason Perry behind the desk, Start The Party sees the boys embracing everything that they – and their fans – love the most. “It’s about positivity, moving on and getting on with life,” says co-vocalist Sean Smith.

There are a number of different formats that the record will be in. There’s a standard CD available physical and digital. There’s also going to be a deluxe physical edition plus a bonus DVD tracking recording, writing, live performances at Reading and Leeds and the band at home in Merthyr. Oh yeah, and there’s a iTunes version which has the standard album plus three bonus covers:

“This album captures our real personality,” says Sean. “That laryiness, the yobbish, laddish, loud, shouting happy gang that’s all about doing what we want and having a good time. We’re like the Beastie Boys meets Andrew W.K. meets Dirty Sanchez.”