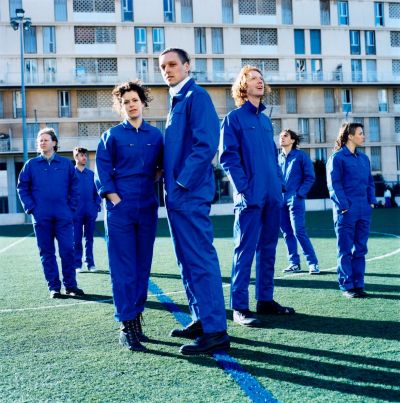 In its sixth year, Arcade Fire joins the group of previous winners which includes Montreal’s Karkwa (2010) for Les Chemins De Verre, Toronto’s Fucked Up (2009) for The Chemistry Of Common Life, Dundas’ Caribou (2008), for Andorra, Montreal’s Patrick Watson (2007) for Close To Paradise and Toronto’s Final Fantasy (2006) for He Poos Clouds.

“We feel very emotional to receive an award based solely on artistic merit. We really believe in records and we are thankful to the Polaris for recognising our work and the work of so many great Canadian artists!” – Arcade Fire

The suburbs have always spawned poets who flee to the world’s great cities. Montreal’s Arcade Fire, however, return to the landscapes of their youth and return with the songs of ‘The Suburbs’: songs that draw on themes of loss and renewal, of drawing inspiration from scarcity, of generations past and future, of responsibility and maturity, of hoping that something pure can last. ‘The Suburbs’, like its namesake, revels in open space, reflections on long drives, and contemplating possibilities. Lyrics decrying wasted time, arms folded tight, and cities with no children are set to sparse pop, icy new wave epics, anthemic punk and lush balladry-all delivered with a breadth and beauty that expands the palette of a band that has never settled for the easy route out of town.

The gala was hosted by CBC Radio 3’s Grant Lawrence with MuchMusic’s Damian Abraham, who is also the lead singer for 2009 Polaris winners Fucked Up.

Liisa Ladouceur, who oversees the Grand Jury, had this to say about the deliberation: “There’s no such thing as a guaranteed winner with Polaris. As always, this year, there was a long and thoughtful discussion about the merits of all the Short Listed records. In the end, ‘The Suburbs’ was recognised by many jurors as the most accomplished and complete artistic statement.”