New Jersey rock band Thursday returns on April 11 with new album ‘No Devolución’.  On their sixth studio album, Thursday explores elements of post-rock, indie, art and experimental styles, blending it all with their post-hardcore roots for a beautifully cathartic experience unlike anything they’ve done before… 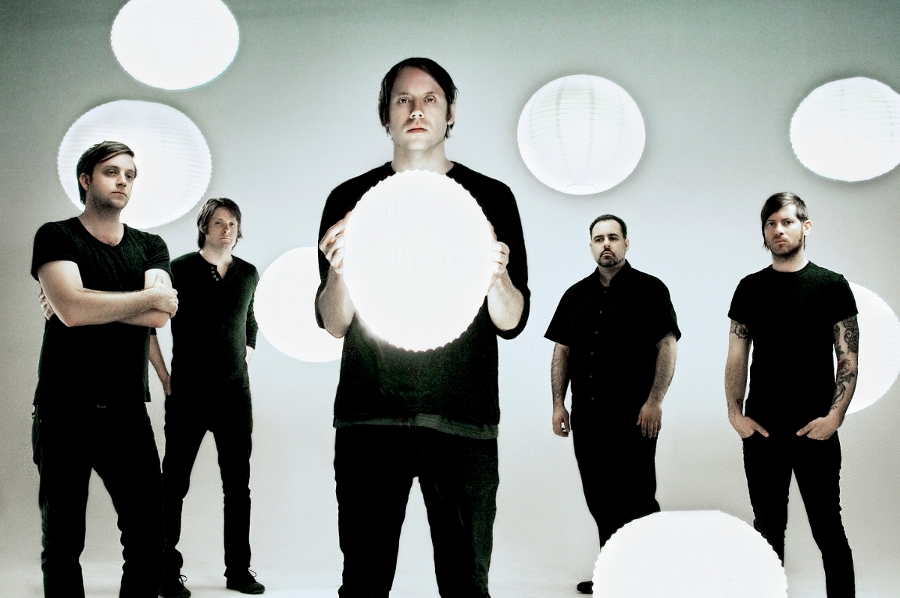 Emotionally charged atmospheric guitars, rhythm and keyboards swirl in unison with Geoff Rickly’s inimitably intense vocals, painting a powerful cinematic-like soundscape and grabbing hold of listeners with each twisting turn. No longer merely the “screamo” band of yore, Thursday has transcended the genre they helped to spark with ‘No Devolución’, which translates to ‘No Returns’.

‘No Devolución’s theme of devotion can be felt as the dramatic arc of the album unfolds. Segueing seamlessly from one to another, ‘No Answers’ and ‘A Darker Forest’ find Thursday at their most vulnerable place ever. Rickly’s haunting vocals float through fields of atmospheric guitars and keyboards, building to the album’s first single “Magnets Caught In A Metal Heart,” a stunning and memorable song of love’s bittersweet attraction.

Thursday continues the intensity with ‘Past & Future Ruins’, a surging blast of post-rock, slowing only momentarily for the somber ‘Empty Glass’, an emotionally raw song set to an organ that tears at the heart with every word of Rickly’s vocals. ‘Open Quotes’ races back cutting sharp turns with intricate guitars under Rickly’s echoing vocals, right into the searing indie rock anthem ‘Millimeter’. Rule’s rhythm provides the backbone to Keeley, Pedulla, Everding and Payne’s sonic landscape on ‘A Gun In The First Act’ and ‘Sparks Against The Sun’ while Keeley and Pedulla lead the rhythmic assault on ‘Turnpike Divides’, which is sure to be a fan favourite.

Upon completing the album, Rickly says he searched for the perfect artwork to capture the record’s evolving sound and eventually stumbled on artist Mia Pearlman. “I saw an image of Mia Pearlman’s ‘Eye’ which is a giant white paper installation and kept thinking about it,” says Rickly.  “Eventually, I realized she lived near me and approached her about making a cut paper piece as our album artwork. We’re thrilled. The record sounds like her work looks.”

Thursday are planning to tour Europe in Spring this year. More details will be announced soon.

‘Fast To The End’

‘Sparks Against The Sun’

‘Past And Future Ruins’

‘Magnets Caught In A Metal Heart’

‘A Gun In The First Act’