After unleashing two tracks, ‘Jump Down’ and ‘Carry It’, from his upcoming solo album on iTunes, Blink-182 drummer Travis Barker has confirmed more details about the album, titled ‘Give The Drummer Some’, which will be released March 14, 2011 by Interscope Records. 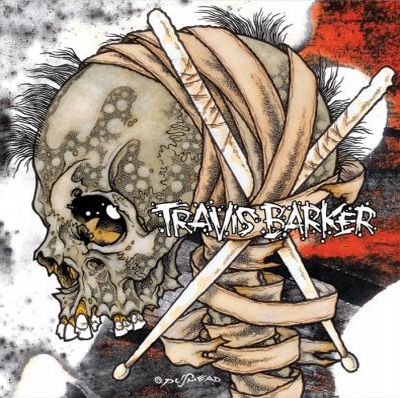 The first single will be ‘Can A Drummer Get Some’, featuring The Game, Swizz Beats, Lil Wayne, and Rick Ross. ‘Jump Down’, featuring The Cool Kids, and ‘Carry It’, featuring RZA, Raekwon, and Tom Morello, are currently available on iTunes.

Other confirmed tracks include ‘Devil’s Got A Hold of Me’, featuring hip-hop supergroup Slaughterhouse, ‘Misfits’, featuring Steve Aoki, ‘Cool Head’, featuring Kid Cudi, ‘Don’t F**k With Me’, featuring Paul Wall, Kurupt, and J Roc, ‘City of Dreams’, featuring The Clipse and Kobe, and ‘On My Own’, featuring Slipknot’s Corey Taylor. More very special guests are in the works with details to be announced soon.

In addition to the list of musical artists that Barker worked with on ‘Give The Drummer Some’, he has enlisted his favorite artists from the art world to come up with a visual representation of each track on the album. The who’s-who list includes seminal artists from the street, tattoo, graffiti, fashion and music world: Slick, David Choe, Mr. Brainwash, Mike Giant, Haze, Munk One, Nate Dino, Skinhead Rob, Cool Head – Jeff Soto, Richard Sanchez, Risk One, Chase Tafoya, Chris Peters, Dire One, Mr. Cartoon, Maxx242 and Usugro. Each song’s accompanying art will be rolled out in the coming weeks on Barker’s website. Additionally, ‘CTDGS’s cover art was created by legendary rock ‘n’ roll cover artist Pushead. Pushead has collaborated on revered classic album covers with such recording artists as Metallica and Dr. Octagon.

As Barker announced on his Twitter, the album will include 12 tracks with 16 tracks to be included on the deluxe version. In addition, Barker continues to be actively involved with his clothing and accessory company Famous Stars And Straps, his label LaSalle Records, and his band The Transplants (with Tim Armstrong and Skinhead Rob), are gearing up to record their third album. Barker, has also been in the studio with the re-formed Blink-182, who will release a new album in 2011.